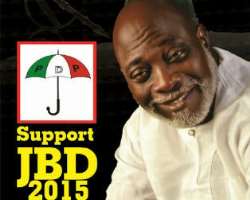 Respite is on the way for the unemployed in Owo/Ose communities in Ondo State as their illustrious Jibola Dabo has advanced dialogue with a giant financial institution and a telecommunication outfit through his Foundation to establish a branch and a manufacturing base in the area.

Jibola has been gravely concerned on the unemployment situation in his local communities. A genuine concern for his people, devoured of political sentiments speaks volumes of what Jibola Dabo will do for his people when he represents them at the National Assembly in 2015.

According to the CEO of Bisola Hair and a motivational speaker, Bisola Iyasara, Jibola's Dobo spokesperson, the recruitment exercise will commence as soon as the institutions are on ground. 'This is just another opportunity for Jibola Dabo to empower his people' says Bisola Iyasara. He has worked tirelessly to convince these institutions of high repute to locate their branch and plant in his communities because he has dedicated his life to serve and empower his people.

Jibola Dabo declared for PDP as the political platform for his election. Jibola is sure of securing his people's mandate because of the love and unmatched support of his people and fan base that cut across his immediate political constituency, state and the world. The veteran Nollywod actor does not see any obstacle on his way to victory because his people unanimously prevailed on him to represent them. A man, whose integrity stands stronger than iroko tree, is undoubtedly, a man of his people.

Jibola will not stop at anything in impacting positively on the lives and well-being of his people and the project at hand will be yet another testament says Bisola Iyasara.