I Am Yet To Make Money Through Comedy—Julius Agwu Laments 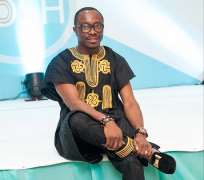 One of the leading Nigerian comedians, Julius Chinweikpe Agwu, who debuted in the entertainment in 1993, when he started off as an actor, has disclosed that he is yet to experience a thorough change in life with his comedy business.

Speaking on what comedy hasn't done for him, the Theatre Arts graduate claims comedy hasn't given him the kind of money he wants. But he stated that he is contented with his present status, adding that the success he has achieved through comedy has not changed who he is.

According to the 41-year-old indigene of Choba in Rivers State, he still retains his old friends, disclosing that he is still the Choba boy who started from a humble beginning that has not forgot his roots, despite living in a 'choice areas' in Lagos.

The showbiz entrepreneur and creator of the fast growing music genre 'music comedy' further confessed that comedy has helped to transform his life.

New Emir of Kano, Sanusi Lamido Sanusi Clamour's For #Bring Back Our Girls