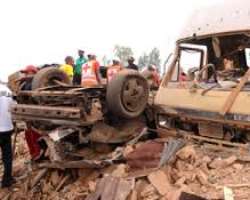 The terror attack suspected to be the handiwork of the dreaded Boko Haram Islamist insurgents.

The explosion occurred shortly after the kick-off of the Brazil vs. Mexico match in the ongoing World Cup.

Witnesses said that the bomber brought the explosive devices in a tricycle shortly after the commencement of the Brazil – Mexico encounter which kicked off around 8PM local time as the bomb went off almost immediately.

Medical personnel on duty at the Sani Abacha Specialists Hospital in Damaturu the Yobe State capital, confirmed to Channels Television that several casualties were being brought to the hospital for medical attention.

not long after the 8pm kick-off of the Brazil vs. Mexico match in the ongoing World Cup. It will be recalled that a bomb blast killed scores at a football viewing centre in Mubi in Adamawa State recently, an incident that prompted the Plateau State Police Command to ban football viewing centres across the local government areas in the state for security reasons.

Victims of this blast have been taken to the Sani Abacha Specialist Hospital in Damaturu.

The police authorities had last week advised that people stayed away from such centres as they had intelligence report of a plan by the terror group to hit such centres.