#BringBackOurGirls: Two Months On, How The Girls Were Kidnapped 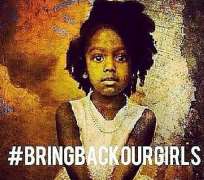 All idiots are morons, but not all morons are idiots

Few weeks ago when I started writing about the abducted Chibok girls, I laid down what I like to call some ground rules or maybe facts of the matter as it is. I did not expect it to go down well with many, but truth be told, what's the essence of an opinion of it is made so that it goes down with everyone.

The ground facts are that girls were indeed abducted from the Government Secondary School in Chibok, and other fact is that the figures are conflicting, it is even safe to conclude that no one knows that exact number of girls abducted. It is also a fact that even the examining body WAEC, do not have its possession photo-cards or data to help with the numbers

Before Chibok, Boko haram had established a tradition of abducting girls and women, for countless reasons, authorities were quiet, the media reported a few and finite (that's all).

This writer had interviewed several girls and women who were victims; they escaped one way or the other, including one that reportedly may be carrying the dangerous Shekau's child. A fact being that there are several hundreds of girls that are victims of these terrible group and we have not done much.

The questions are many, but as I continue to run commentary on the #bringbackourgirls advocacy I could not but feel for the real parents, how many are now making money out of them. The campaign has become like many a CSO thing a source of income, with the Nigerian factor at work.

We had to seriously make an effort not to forget as the days ran bye.

Then cometh the hour, cometh the man, former Olusegun Obasanjo, Le president blurted out, 'many, most, half of these girls will never come backand I need presidential/federal government permission to do business with the boko boys'.

As I listened to that interview of Obasanjo, a lot went through my mind, I recalled the Chief of defence' statement that the girls location was now know but as usual bla, bla, bla and bla. I married my thoughts to what I call the international week of boko haramthe week were United States, UK, France, China, Togo, were all willing to help, and how the drones were droning. What became of all that drama?

It simply occurred to me that we are not really a serious people on matters that we should be serious. Now the question and the subject of my admonition this week, how were the Chibok girls abducted?

The answer is simple, the story of morons and idiots

Last week, I had to drive through three states in the North for official purposes, I passed through countless checkpoints manned by STF, JTF, I could almost add that a few of the checkpoints based on the candor of the officers and men were manned by PTF if you get the drift.

In the over 15 checkpoints, no one check my boot, no one did a comprehensive search, none asked any intelligence based question. They did not look smart, neither were they motivated.

Anytime I was stopped, it was a case of agitation rather than doing what is right, and on those few occasion, infact three of such, a N100 Note did the magic and brought a smile to an otherwise frowning face.

I could have been carrying one of the Chibok girls in my booth, infact given that my booth is quiet big, I could put two or three of them and go through the three states.

At one of the checks, a policeman asked 'anything for dogo (the hausa word for tall)'. I smiled and handed him a N200 note and drove on. I could have been carrying arms but no one cared.

Its now over 60 days the Chibok parents are grieving and mourning, but really it is more of bewilderment and pain as they do not know exactly the situation of their wards.

In 60 days we have lost men and officers, more villagers have been killed and loads of propaganda, half-truths, misinformation and sheer falsehoods, government is divided between apc/pdp, shetimma/jonathan, even the airforce has accused the army of taking their shine. The army has had a mutinous situation, local media vs. foreign media, and Christians/Muslims. But fact is that we do not have the chibok girls.

Infact but for a quick denial by the Fulani community, more women are reported to have been kidnapped. Sadly the daredevil Boko Haram group seems to have the edge, making all sorts of demands, releasing videos, and creating more confusion.

Meetings have been held in Paris, committees have been set up, as I write a London meeting also in the card, Obama has spoken, Michelle has added her voice, but as we enter the third month, the fact is that some girls just disappeared.

They were abducted because our institutions are not working the way it should, the girls will/may not be found because we are not sincere people, we are largely and easily divided by our selfish motives. We all engage in blame games, but let us remember that the longer we are on this Chibok saga we only portray ourselves as morons and idiots, will we be talking Chibok next weekonly time will tell.