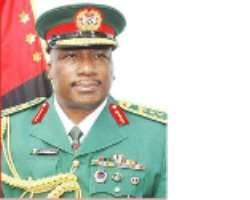 The Nigerian Army has set up a court martial to try some of its officers involved in a fraud that is running into billions of Naira. The fraud said to have been committed between 2006 and this year, is said to be the mother of all frauds in the history of the Army as, according to army sources, some officers and soldiers were involved in gunrunning and selling of arms, ammunition and other weapons to militants in the Niger Delta. About N250million was traced to the account of a serving Major in one of the new generation banks.

However, at the centre of the latest billion Naira fraud, is a Brigadier-General, who allegedly used his office as the Managing Director of the Nigerian Army Post-Service Homes Saving and Loans Limited to dupe thousands of applicants for the army post-service housing of billions of Naira.

The Brigadier-General (names withheld), who until recently was the immediate past Managing Director of the Nigerian Army Post-Service Homes (Saving and Loans), Limited(PHL), was said to have used his office and the name of the Army to carry out his illegal act and failed to allocate the said houses and lands in some cases to both military personnel and civilians who did not only apply for the houses, but also paid the mandatory 50 per cent initial deposit.

Daily Sun gathered that some of the subscribers were even forced to pay 100 per cent because they were meant to believe that that was the surest way to get quick allocation.

Apart from duping innocent Nigerians - both civilians and military personnel, the General was also said to have squandered every kobo he met in the account of the savings and loans scheme. The money, which was said to have been obtained as loan from a new generation bank to set up the scheme is now said to be running into another billions of naira (as a result of the accummulating interest - as nothing has been paid to the bank since the Army took the loan).

Rather than utilize the money collected for subscribers to pay back part of the loan, the General, who was having a field-day in office, was said to have successfully covered up his illegal deals by building palatial houses free of charge to top Army officers that matter to ensure that his illegal deals were covered.

He was also said to have built houses for the then Chief of Army Staff (COAS) and every other person that is close to the COAS including his wife, brothers, and some top Generals to curry their favour and conceal his illegal acts.

Also to appear before the court martial, is a Colonel (names withheld), who was in-charge of the projects at the site. The Colonel is said to own choice properties in London and other parts of Europe, courtesy of the booty he got as share from the subscribers' money. To ensure an easy escape, the Colonel was said to have relocated his family to London as if he had a premonition of what was going to happen, having failed in their bid to deliver the houses to the subscribers.

The Colonel, who was desperate to escape recently applied for voluntarily retirement from service to join his family in London, but his application was rejected.

Daily Sun gathered that trouble started for the accused General and his partners in crime after thousands of subscribers most of them civilians, petitioned the Army authorities over the refusal to allocate to them houses they had paid for after nearly four years and threatened to go to court should the Army fail to refund their money. The subscribers said they went into business with the Army because they consider the force to be a reputable organization and not that of a “419.”

Worried by the number of petitions at the office of the Chief of Army Staff daily, the authorities decided to immediately remove the General from office and redeploy him. Shortly after, the authorities retired the General without knowing that he had accumulated debts running into billions of Naira for the Army.

On realizing the gravity of the offence and embarrassment they had caused the Army, the General who was enjoying his ill-gotten wealth in Lagos, was immediately recalled to answer the numerous questions about what he knew. Upon his assumption, a Board of Inquiry (BOI), was set up to look into the matter.

The BOI, headed by Major-General G.G. Umoh, during investigation, discovered the attrocities committed by the Brigadier-General and his cohorts as petitioners provided adequate evidence to the BOI. It was also discovered that the General and his partners, had gone as far as allocating one house to more that three subscribers, some of whom were said to have paid as much as N40million for the duplexes and plots of lands.

It was also discovered that not a kobo was paid to the bank that offered the loans to set up the saving schemes, thus increasing the interest that is now running into billions of Naira. He was also said to have squandered every kobo he met in the account when he assumed duty rather than make effort to pay up the loan with money generated from the sale of the houses.

Daily Sun also gathered that the board also discovered that not a kobo had been paid to contractors that built few houses on site as the General and his partners had been making promises to them since they completed their work over three years ago.

It was also discovered that spaces meant for the building of schools, play-ground and shopping centre as approved by the Federal Capital Development Authorities(FCDA), for estate development in Abuja have all been sold out to thousands of subscribers, but yet to be allocated to them.

Sources told Daily Sun that some of the best houses at the Post Service Housing Estate at Kurudu, Abuja, are either owned by the General, the Colonel and one civilian (names withheld), believed to be a childhood friend of the Colonel. The said civilian was said to have involved the services of his family members and friends to carry out the illegal projects at the site.

The duo successfully carried out their illegal act with the General operating from the Lagos office of a savings and loans company located opposite Federal Secretariat, Ikoyi, while the Colonel operated from Kurudu, to convince the subscribers and Army authorities that they were really working hard to deliver the houses.

To attract subscribers to buy the houses, the General was said to have employed young pretty and attractive girls as marketers who went about in Lagos and Abuja to sell the forms. His marketing strategy was said to have been very successful, as he was able to lure thousands of subscribers. The fraud was made more believable by the fact that the project was an Army project. This made many of the victims to not just stop at buying the forms, but also paying the total monies required for the houses and lands.

Incidentally, this is not the first time the Colonel's name would be coming up in a scam. He was mentioned few years ago, in a similar case at the Armed Forces Command and Staff College, Jaji, where people were duped of millions of Naira during the construction of an auditorium, named the Ogundana Hall at the college. The fraud which brought the project to a near collapse, when discovered nearly cost him his early retirement from service. He was, however pardoned after several pleas from fellow officers. He was subsequently redeployed to the Post Service Loans Schemes, Abuja.

The Post Service Homes Savings and Loans Limited, was set up in 2006 to provide houses and mortgage for military personnel and the general public at affordable prices while maintaining excellent standard.

The scheme, which is 100 per cent owned by the Army, was established as part of its commitment to the welfare of its officers and soldiers and was granted mortgage banking licence by the Central Bank of Nigeria (CBN) in June, 2006.

Some of the products and services offered by the scheme to its customers who are members of the armed forces and the general public include cash, regular savings, target savings, fixed deposit account, mortgage loans, business short-term loan/working capital facility, social loan facility and payment services.

A customer is supposed to actively operate his or her account for a minimum of six months. However, each application for loan is usually considered on its merit, while facility is repayable through the sale proceeds of the houses within one year.

The scheme was set up by the Army after it discovered that the Post Service Housing Development (PAD) set up to execute the mandate of the housing scheme did not meet the objectives of the vision of the army.

Rather than providing houses where officers and soldiers would retire to after a successful military career, the department was busy engaging itself in building houses and lands for any newly-appointed COAS and other top military officers and engaging in other businesses, while those who are supposed to benefit from the laudable project are tossed up and down, especially when they don't have a godfather to speak on their behalf.

Perhaps, it was this precedence that prompted the General and his colleagues to carry on and partake with their own sharing of the “cake” since those at the PHD acted the same way and were never really brought to book. But he was not too lucky with the deal, as the subscribers, who are mostly civilians, would not let him or the Army authorities rest until they get their houses.

Following the discovery of the fraud, Daily Sun gathered that army authorities have gone ahead to release allocation letters to some of the subscribers, even though most of the houses are still at foundation stages and asking them to complete them, while arrangement is on-going to settle thousand others with the same fate as they all have genuine papers to show as proof that they have fulfilled all the obligations required by the Army to own the Post Service Houses. (Culled from Sun)