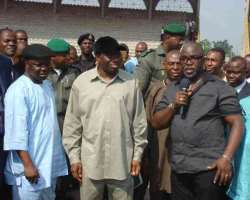 The plan by Acting President Goodluck Jonathan to carry out a major surgical operation on the federal cabinet by not reappointing most of the sacked ministers had put him on a collision course with some influential state governors in the country.

Daily Sun gathered from authoritative sources that Jonathan's efforts to achieve a radical change by injecting go-getters into the new cabinet are being frustrated by the governors largely based on individual political and other pecuniary reasons.

According to a Daily Sun source, majority of the Peoples Democratic Party (PDP) governors are not favourably disposed to supporting the change of the ministers from their respective states by Jonathan.

'For the simple fact that the next general elections are just by the corner, most of the governors do not feel safe to change the ministers from their states at this stage which they consider critical. They believe that the devil you know is better than the angel you don't know. That is why many of them have been dragging their feet by not sending their lists of fresh ministerial nominees as requested by the acting president. Instead of sending new names, they are busy lobbying for the retention of the non-performing former ministers,' the source revealed.

He added that due to certain calculations, which include loyalty of the ministers to them, the affected governors are shielding their ministers whose performances in their respective federal ministers have fallen below expectation. However, despite such protections by the governors, Jonathan is poised to effect the changes as he has set the final deadline for the governors to supply their nominees or else he would proceed and appoint whoever he pleases from those states.

Due to the governors' un-cooperative attitude about the planned cabinet changes, Jonathan, for sometime, was in a dilemma as to how to go about the desired exercise without rupturing his administration's good relationship with the governors, the source hinted further. But he is said to have run out of patience with the governors over their self-centred power play and is now ready to break the ice by going ahead with the reconstitution of the cabinet.

It was also learnt that the opposition of some the governors to change of the ministers was part of their grand design to checkmate Jonathan and prevent him from consolidating and growing in power and influence. 'The governors are doing everything they can to keep the acting president under reasonable check and prevent him from carrying out far-reaching changes that would make him become too powerful and independent-minded,' the source added.

He said: 'Goodluck is concerned about how to move the nation forward and some reactionary forces are slowing him. I can assure you that he is set to call the bluff of those who think they can frustrate him.'

'It is most disappointing that most of the governors are placing their personal political gains and some 2011 calculations over and above national interest. Such antics will not augur well for the larger interest of the majority of the people and the acting president believes there ought to be a dividing line between personal considerations and public good,' the sourced emphasised.

In normal circumstances, state governors from the ruling party or other parties in alliance with the central government send list of ministerial nominees to the president as a guide to select from. The president is, however, not compelled to restrict his choice to the list, which usually comprises a maximum of three options to choose from per state.

The source stated that the acting president has decided to court the Senate for its support as he prepares to dispatch his list of star-studded ministerial nominees to the upper chamber for screening not minding the wishes of the governors.