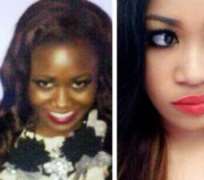 The hashtag #BleachedBeauty trended on Twitter on Monday as Kenyan socialite Vera Sidika's public admission on her use of skin lighteners opened up a conversation about skin bleaching all over Africa.

Abbie H (Abroni) (@huffsterrr) said: 'Bleaching is on the increase in #Kenya. It breaks my heart. This photo though #bleachedbeauty pic.twitter.com/9LwmLmeoDp'

As the day wore on, users from many countries tweeted their reactions to the practice, most recently vocalised by celebrity Sidika but common in Nigeria, where an estimated 77 percent of women bleach, and South Africa, where the number is closer to 35 percent.

Isaiah Githinji (@IsaiahGithinj) said: 'Emancipate yourself from mental slavery. Who told you black is not beautiful? #BleachedBeauty'

Many tweeted pictures - white-faced women with dark brown hands and feet, faces covered in black blotches when the creams had gone horribly wrong.