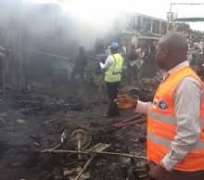 A female suicide bomber killed herself and a soldier outside an army barracks in Nigeria's northeastern city of Gombe on Sunday, the military said, as local leaders reported the death count from a string of earlier militant attacks had reached 110.

No one claimed responsibility for the blast or last week's assaults, but Islamist group Boko Haram has set off bombs and killed thousands in its 5-year-old bid to carve out an Islamist state in the region.

Soldiers stopped the woman as she tried to get into the barracks with explosives hidden under her robes, defense headquarters said in a statement.

The device went off, killing her and a soldier searching her, it added.

Witnesses had earlier said between three and five people died.

Boko Haram - which dominated world headlines by kidnapping more than 200 schoolgirls in April - has fought back against an army offensive, piling political pressure on President Goodluck Jonathan and the military to end the carnage.

Leaders from Gombe's neighboring state of Borno told journalists on Sunday they had now buried 110 bodies from attacks on nine villages early last week - giving the first detailed breakdown on the casualties.

'It was a great tragedy. There are still corpses lying in the bushes surrounding the communities. Many of our people that fled to the top of the hills during and after the attacks are still there and now stranded,' said Ali Ndume, a senator representing southern Borno.

Civilian targets
Boko Haram started off focusing on military and government targets alongside schools - seen as representing corrupt Western influence - churches, and Muslim leaders who do not follow its brand of Islam.

It has been increasingly turning its guns on civilians in recent months, particularly after locals started setting up vigilante groups to try and fight back.

It has become the biggest security threat to Africa's biggest economy and oil producer.

Traditional leader Lawan Abba Kaka said they had buried 42 corpses at the village of Attagara, 24 at Aganjara, 20 at Agapalawa and smaller numbers at other settlements - all of them in the Gwoza hills near the border with Cameroon.

'The insurgents came and said they wanted to discuss something with us. They said we need to discuss some issues bordering on our differences in the communities, but they opened fire on people who were gathered,' said Kaka.

On Wednesday, gunmen rounded up more villagers outside Borno's state capital, Maiduguri, saying they were going to deliver a sermon, then opened fire, killing at least 42, said a police source.

'It seems they are moving to rural areas,' Hannah Donges, a researcher at the Small Arms Survey, told Reuters. 'They are easier targets. It doesn't need sophisticated tactics. It makes them (Boko Haram) less predictable.'

Suspected Boko Haram militants attacked a town in Cameroon's far north on Saturday, but local security forces fought them off, killing at least two gunmen, Cameroon's government said. The militant group is also thought to be active in neighboring Niger and Chad.

The kidnapping of the girls from a secondary school in Borno's town of Chibok triggered a national and international campaign under the Twitter hashtag #BringBackOurGirls, calling on the government to step its efforts to free them.

The anti-robbery team attached to Mowe Division of the Ogun State police command on Saturday gunned down a member of an armed robbery gang at Redemption Youth Camp, on the Lagos/Ibadan Expressway, while others escaped with bullet wounds.

The police had engaged a gang of armed robbers in a gun duel until the robbers bowed to the superior fire power of the police men.

According to reports, the incident occurred at about 9.30p.m. after the robbers snatched a Toyota Sienna vehicle, with registration number LSD 339 CH, at gun point near the camp, which incidentally, was close to the pin-down point of the police team.

The robbers had reportedly shot and injured the owner of the car (names withheld), who resides at Aguda area of Lagos State, before snatching the vehicle.

The sporadic gunshots of the armed robbers were said to have attracted the policemen on duty near the scene, prompting them to give the hoodlums a  chase.

Unable to withstand the response of the policemen, the robbers reportedly abandoned the vehicle and fled into the nearby bush on the expressway, with bullet wounds.

On a search in the bush area around the scene of the encounter, the police were said to have discovered the corpse of one of the robbers.