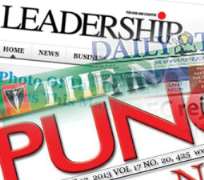 The Federal Government continued its clampdown on the media today (Saturday) by disallowing circulation of newspapers in the Federal Capital Territory and many parts of the country.

As early as 2am, armed soldiers stormed the newspaper distribution centre at Gariki, 'Area One', Abuja, marching out marketers of media houses, distributors and vendors.

They prevented marketers from offloading newspapers from distribution vans that brought the newspapers to the centre.

The soldiers searched each of the marketers, distributors and vendors, before allowing them to enter the centre.

The situation, however, worsened at 7am, when the soldiers ordered them to go home, insisting that they would not allow the distribution of the newspapers.

When the workers of the media houses and distributors assembled near the centres, the soldiers dispersed them, threatening to deal with any of them that failed to leave the area.

Our correspondents learnt that the situation was the same in some parts of the country.

In the South-West, distribution vans of The Nation were impounded with the loads of the newspapers meant for distribution on Saturday.

The Chairman of the Board of Trustees of Newspaper Distributors in Abuja, Mr. Oladipupo Moses, said the soldiers impounded the distribution vans of several media houses at the Garki Area one distribution point for the newspapers.

He said the distribution vans in custody of the soldiers included those of The Guardian, Leadership, Thisday, Daily Trust, Sun, Pilot, Newswatch and The Mirror.

Oladipupo said the soldiers, led by an officer in a green tracksuit, said henceforth, all the distributors and the vendors must operate with identity cards.

He said the Army Officer stated that some vendors had been caught with arms in Jos, Plateau State, while other dangerous weapons were found in market stalls where fruits were sold at Nyanya, Abuja.

Oladipupo said the soldiers assembled all the vendors and searched all of them before releasing them to go.

According to him, the soldiers confiscated the vans and their content and chased away all the distributors from the area.

He said, 'They impounded all our distribution vans. The ones that arrived early and were seized are Leadership, ThisDay, Daily Trust, Sun, Pilot, Newswatch and The Mirror newspapers.

'They took over and searched all of us. They said they arrested vendors with arms in Jos. They also discovered arms in market stalls where they sell fruits in Nyanya. They don't allow us to distribute newspapers.

'They assembled all of us and searched all our pockets, but they didn't beat anybody.'

When one of our correspondents contacted the Director of Defence Information, Maj. Gen Chris Olukolade, for his comment on the military's action, he referred him to a statement on Friday in which he said the action was a product of an intelligence report that the vans were be disguised to circulate dangerous weapons.

He said, 'See my statement of yesterday.' Punch