PDP: Fani-Kayode justifies our position that APC is a religious party 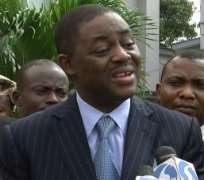 The Peoples Democratic Party has said that the defection of the former Minister of Aviation, Mr. Femi Fani-Kayode, from the opposing All Progressives Congress (APC) to its fold and the expose he made about the character of his former party have vindicated its position that the   APC remained a party 'of bloodthirsty, religious and ethnic bigots averse to the unity of the country.'

The said that the revelation by the former minister that the APC had sympathy for insurgents further confirmed PDP's earlier position linking APC's utterances to the spate of insurgency and sectarians violence in the country.

According to a statement by the PDP National Publicity Secretary, Olisa Metuh, 'We have now been vindicated. The truth may be hidden for sometime but it has a way of expressing itself.

'The world can now see that we do not speak for nothing when we describe them in their true nature; a cult, a hypocritical lot, wolves in sheep skin, devils, who, through their utterances, stoke the fires of violence by night only to wear messianic robes in the morning to shed crocodile tears for their victims.''

'Nigerians are no longer at loss regarding who their real enemies are. They can now see why the APC feels no pain but seeks always to gain political capital out of the bombings and killings in our country.'

The party noted that a lot of reasonable and respectable Nigerians still in the APC would soon join the PDP.

Fani-Kayode has said he left the APC and joined the PDP because of the APC's alleged Islamic agenda and that the leadership of the party was not sincere.

The first indication of the move came a few months ago when the former minister, who hitherto was a stringent critic of President Goodluck Jonathan, visited the president in the State House Abuja.

It was speculated then that the President may be putting him forward as the anchor man of the communication machinery of his campaign ahead of 2015 elections.

A statement by the former minister on Monday described the spokesperson for the party, Alhaji Lai Mohammed, as a liar - for allegedly saying that he (Fani-Kayode) never joined the party.

The statement by Fani-Kayode read in part, 'I have stated these facts and set the record straight - due to the fact that Alhaji Lai Mohammed, the spokesman of the APC, had the effrontery to say in an interview with a magazine earlier today, that I was never a member of the APC and that I never joined them formally. The truth is that Mohammed is not only a liar but he is also a coward.

'I cannot remain in a party where a handful of people that have sympathies for Boko Haram and that have a clear Islamic agenda are playing a leading role.

'This is made all the more untenable when some of those people are working hard silently and behind the scenes to impose a Muslim/Muslim ticket on the party for the Presidential elections next year.