Mortuary staff charged with stealing from the dead 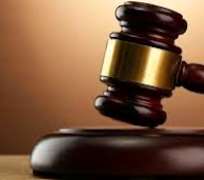 The Nigerian police in Benin City have arraigned two mortuary workers for allegedly stealing jewelries placed in the casket of a deceased woman.

According to police prosecutor, ASP Emmanuel Obakpolor, ‎the accused, Osaro Benjamin (50), and Idowu Eriemator (26), both employees of Stella Obasanjo Hospital, in Benin, allegedly conspired and committed the offence on 12 May, at the morgue of the hospital, located along Country Home Road, off Sapele Road.

Obakpolor listed the stolen jewelries stolen from the casket of late Mrs. Esther Akora, to include gold ear-rings, gold necklace and a gold wedding ring, all valued at N4 million.

He said the offences of conspiracy and stealing contravened the provisions of sections 516 and 390 (9) of the Criminal Code.

The accused persons who pleaded not guilty to the charge.

If convicted, they could be liable ‎to jail terms of either two or three years.

The Chief Magistrate of the Court, Mr Frank Idiake, who granted bail to the two accused persons in the sum of N500,000 each with a surety each in like sum, ordered that the sureties must be resident within the court's jurisdiction‎.