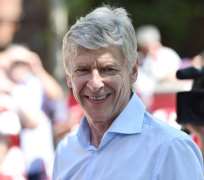 The new deal was announced by Arsenal to the London Stock Exchange and will take Wenger into his 21st year at the club, where he has been in charge since 1996.

'I want to stay and to continue to develop the team and the club. We are entering a very exciting period,' Wenger said on the Arsenal website. 'We have a strong squad, financial stability and huge support around the world. We are all determined to bring more success to this club.'

MORE: Dempsey's sore groin is improving
The 64-year-old Frenchman won three Premier League titles and four FA Cups in the first half of his Arsenal tenure, but failed to capture a trophy since 2005 until winning this season's FA Cup.

Wenger has guided the London side into the Champions League for 17 consecutive seasons and is the longest-serving manager in the Premier League following the retirement of Alex Ferguson at Manchester United last year.

'The club has always shown faith in me and I'm very grateful for that,' Wenger said. 'We have gone through fantastic periods and also periods where we have had to stick together. Every time when that togetherness was tested I got the right response. I think I have shown some loyalty as well towards this club and hopefully we can make some more history. I am sure we can.'

MORE: Klinsmann still confident in Jozy Altidore
Wenger is Arsenal's most successful manager in its history, helping change the face of English football by bringing in new training methods and dietary plans that were regarded as revolutionary in his first years in the country after joining from Japanese club Grampus Eight. Previously, he was at French side Monaco.

On the pitch, his Arsenal team broke United's stranglehold on the Premier League around the turn of the century and then went through a season unbeaten in the 2003-04 campaign, playing an eye-catching brand of football with Thierry Henry, Dennis Bergkamp and Patrick Vieira to the fore to the fore.

Fans' patience has been tested in recent years during the trophy drought, however, with dissenters frustrated at Wenger's refusal to spend money on big-name players and his unshakeable belief in squad members who didn't appear to be at the required standard. Further criticism was targeted at Wenger for selling star players Cesc Fabregas, Robin van Persie and Samir Nasri to rivals like Barcelona, United and Manchester City.

The club-record signing of Germany playmaker Mesut Ozil for 50 million euros ($66 million) last summer suggested a chance in stance in the transfer market from Wenger. And winning the FA Cup could be the catalyst for a new successful era under the Frenchman, widely regarded as the Premier League's only unsackable manager.

'Sustained excellence is the hardest thing to achieve in sport and the fact Arsenal has competed at the top of the game in England and Europe throughout the time Arsene has been manager, is the ultimate testimony to his consistency of performance, talent and ambition,' Arsenal's majority owner Stan Kroenke said. 'We are delighted with the FA Cup success which has added to his already outstanding record. Under his guidance we look forward to adding more trophies in future