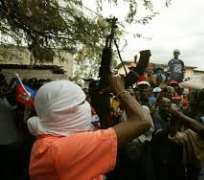 The military was not immediately available to comment on the raids in Borno state, the hardest hit area during Boko Haram's five-year extremist uprising, which has killed thousands.

All of the targeted villages are in the Gamboru Ngala district near the border with Cameroon, where Boko Haram killed hundreds in a gruesome attack earlier this month.

The latest unrest hit the villages of Nuwari, Musari, Walori on Saturday, where gunmen, some dressed as soldiers and riding in 484 trucks, opened fire on civilians and razed much of the area, according to multiple witness accounts.

'They burnt all the villages and took away all our livestock,' said Nuwari resident Bunu Kaloma, providing details reported by other witnesses.

He said 15 people were killed in the spate of attacks but there were conflicting reports and it was not possible to establish a concrete death toll.

Separately on Thursday, gunmen reportedly attacked a wedding in nearby Kolma village.

'They came in after dark while a wedding party was going on and went on shooting and tossing explosives into homes,' said area resident Bukar Mustapha.

The area has a poor mobile phone network and details of attacks often take days to emerge.

Borno residents have been subjected to nearly daily raids in 2014, with more than 2,000 people in the area killed already this year.

Nigeria this month extended a year-long state of emergency in the area, but the extraordinary measure has not stemmed the bloodshed.

Boko Haram has been fighting Nigeria's government to create an Islamic state in the north since 2009, but the conflict has received unprecedented global attention over the last six weeks.

The group's April 14 mass abduction of more than 200 girls from a secondary school in Chibok, also in Borno, has drawn condemnation worldwide.

The United States, Britain, France and Israel are providing varying levels of support to Nigeria's military to help find the girls.