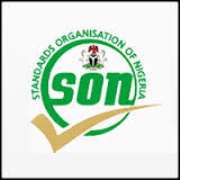 Three cement manufacturing companies, Lafarge Cement WAPCO, Ashaka Cement and Unicem have instituted different suits against the Standards Organisation of Nigeria (SON) over its recent pronouncement and plan to implement a new Mandatory Industrial Standard Order for cement manufacturing, distribution and usage in the country.

The SON published a public notice restricting the application of 50kg 32.5R grade of cement to plastering only in syndicated adverts in some national newspapers on Wednesday, 14th May 2014.

Lafarge WAPCO, AshakaCem Plc and Unicem are challenging this order, which they believe is, to all intents and purposes, aimed at the gradual phasing out of 32.5 cement grade, which has been widely known and used as general purpose cement from the market.

Through the suits, the cement manufacturers are seeking the court to establish whether or not the respondents (SON) have complied with the mandatory provisions of the law for establishing new industrial standard in the introduction of the Commodity Composition and Conformity Criteria for Common Cements and Specification of Mandatory Industrial Standard NIS 444-1 2014.

Thus the complainants are seeking through the courts, a declaration that the introduction of the Commodity Composition and Conformity Criteria for Common Cements and Specification of Mandatory Industrial Standard NIS 444-1 2014 by the Respondents (SON) without complying with the clear and mandatory provisions of the SON Act 2004 and other existing laws for doing so is unlawful, null and void. They are also seeking an order of the court restraining SON, their agents, privies and whosoever purporting to act through the respondents from enforcing and implementing the Mandatory Industrial Standard NIS 444-1 2014.