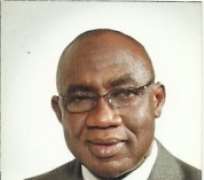 I told you before that as a young man one of the artists I followed his music is the late legendary Afro-beat maestro Fela Anikulapo Kuti. Fela did a lot of songs, most of which are about the misrule of our government and even the western imperialists. Fela did a song titled: 'Beasts of no nation' to protest the evil apartheid regime in South-Africa. And back home, Fela through his songs exposed so many evil in government dealings. ITT (International Thief, Thief) ,VIP (Vagabonds in Power), Teacher don't teach me nonsense, Sorrow, tears and blood and Authority Stealing are a few among many work of legendary Fela. I remember his song title Army Arrangement; I heard Fela singing and saying 2.8 billion naira oil money missing.

Last time, I told you that over 3 billion naira was looted and carted away by the Speaker of Imo State House of Assembly Hon Benjamin Uwajumogu. I told you that the Imo Speaker awarded fraudulent Road Contracts to himself in Imo State using his friends as fronts and used the money he got from the road contracts scams to acquire eye popping mansions in Nigeria.I shouted because In the midst of abundant human and natural resources, the vast majority of Imo working masses live in abject poverty. The vast majority of Imolites are kept in unstable and difficult socio-economic conditions while a tiny fraction have exclusive access to things and comforts of life. I called Uwajumogu the International Thief Thief number one of Imo State.The entire money stolen by Uwajumogu alone is enough to begin to rebuild failed infrastructures in his Okigwe constituency. Yet this same man is jostling to represent Okigwe zone in the Senate.

This time i am pointing at the International Thief Thief number two that is currently in power in Imo State, another VIP (Vagabond in Power). This highly placed government official and his accomplices stole 1billion naira from the Imo State LGA Pension fund when he was the Chairman of Local Government Service Commission. Today, LGA pensioners are calling on the State Government to immediately settle the pension of Local Government retirees in Imo State.So who looted the monies issued out by Governor Okorocha to settle LGA pensioners?

Many of these LGA retirees are already living from hand to mouth, despite having committed their active lives to serving society. Many of them are already infirm and can hardly afford the exorbitant hospital bills charged thanks to commercialization of healthcare in Imo State. Many have their children in schools, and can hardly pay high fees. While many of these retirees have not been put on the payroll since their retirement, those already on the payroll are still owed several months of unpaid pension arrears and gratuity. Thus, these retirees, who have no other means of livelihood, can hardly meet their basic needs, while majority are already in debt. Retirement, which ordinarily should be embraced with joy, has become a source of sorrow, frustration, panic and agony in Imo State.

I am aware that the primary reason for this embarrassing state of absurdity as per pensioners in our LGA's is the "profit first" capitalist Chief of Staff to the Imo Governor Sir Jude Ejiogu who allegedly looted 1 billion naira LGA pension funds in the State when he was the Chairman of Local Government Service Commission. I totally condemn in strong terms this insensitivity to the plights of pensioners in the state. I say boldly today that Jude Ejiogu is the ITT (International Thief Thief number two) in Imo State. Fortunately for this looter, he was not charged to court and he is still in power.

Senate president, David Mark once said 'if your wealth is from people's pensions then that is blood money. It is blood money because you cannot take away the sweat, the entitlements of an old man or an old woman who is looking up just to that little appreciation from his country and believe that you will live in peace. You cannot live in peace because the prayers of those old men at home will fight you.' Like David Mark i share the anguish and anger of the ordinary Imolites against this kind of capitalist looting. To me even the stoning of persons that stole money belonging to pensioners would not be sufficient to compensate the affected pensioners, if on retirement they could not receive their pensions. Yet this same man is jostling to represent Owerri zone for elective position in 2015.

Jude Ejiogu is enmeshed in an orgy of corruption and mass looting of public money and natural resources. I am aware of why Commercial banks operating in Imo State shut their doors against their customers for some days. I am aware that Jude Ejiogu when he was the Special Adviser to the Governor on Internal Revenue Generation (IGR) collected millions of naira from commercial banks in the state as tax but diverted the monies into his own pocket. The State government later demanded the same tax that Ejiogu had already collected from the banks and the banks had to go on strike for excessive taxation .I am also aware that the same Jude Ejiogu allegedly defrauded Hall mark Bank and Progress Bank and ran to USA some years ago. Yet this same man is jostling to represent Owerri zone for elective position in 2015.

To end perpetual mass misery in the midst of an inexhaustible abundance in Imo State, i have commence a campaign against looters like Ejiogu.From week to week i will name them one after the other. As have been amply demonstrated, these capitalist elite like Ejiogu , unless removed from political power will always and would always directly loot the resources that ought to be used to better the lot of the vast majority of the Imo population.Equally worrisome is that when capitalist thieving elite like Ejiogu are not busy with direct looting of the State's treasury, their only other pre-occupation is the implementation of socio-economic policies that can only make life harder for the overwhelming majority of Imolites . This is the primary ideological reason why Ejiogu is a chief advocate for privatization and commercialization of basic needs and social services in Imo State. Through this unjust strategy, he and other ruling capitalist thieving cabal in Imo State have virtually sold to themselves all publicly built government houses and public companies at rock bottom prices, of course, with money directly looted from the state's treasury. Save us o God.