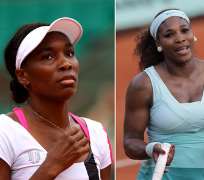 Instead of playing each other this week at the French Open, Serena and Venus Williams will both be heading home early.

The American sisters both lost in the second round on Wednesday, each being outplayed by little-known opponents at Roland Garros, AP reports.

Serena, the defending French Open champion and a 17-time major winner, lost to Garbine Muguruza of Spain 6-2, 6-2. It is her earliest exit at a major tournament since falling in the first round at Roland Garros two years ago — and her most-lopsided loss ever at a Grand Slam.

The Williams siblings would have met in the third round had they both won.

'It was one of those days. You can't be on every day, and, gosh, I hate to be off during a Grand Slam,' the top-seeded Serena said. 'It happens, you know. It's not the end of the world. It is what it is.'

The sisters have lost on the same day at a major tournament twice before, with the last coming in the fourth round at Wimbledon in 2011. The other time was at the French Open in 2008 in the third round.

With Li Na also eliminated, it is the first time in the Open era that the top two seeded women have lost before the third round at any Grand Slam tournament.

Serena struggled from the start against the 20-year-old Muguruza and finished the match with only eight winners and 29 unforced errors.

'Just nothing really worked,' Serena said. 'I don't know anything that actually worked.'

Muguruza was playing at the French Open for only the second time in her career. She lost in the second round last year, but reached the fourth round at the Australian Open in January.

Venus' loss was the eighth time in her last nine major tournaments that she has failed to win more than one match.

The seven-time Grand Slam champion won the first set and was up an early break in the second. But the 19-year-old Schmiedlova responded by taking eight of nine games and won 2-6, 6-3, 6-4.

'I felt like this was a match that I was most likely going to win. I'm sure, I don't know how Serena felt, but I'm sure she feels like that every time she goes on the court,' Venus said. 'So I think our expectation was to play in the next round.'

Since reaching the fourth round at Wimbledon in 2011, Venus has been eliminated in the first or second round at every Grand Slam tournament she has played except the 2013 Australian Open, where she reached the third round.

At 33 years old, Venus is far from her best. But she has been having a solid season in 2014, winning a hard-court title in Dubai and reaching the final in Auckland.

Against Schmiedlova, the 29th-seeded Venus ended up with 47 unforced errors. Schmiedlova had only 20.

Venus won the last of her seven major titles at Wimbledon in 2008. She has never won the French Open, but lost to Serena in the 2002 final in their only meeting at Roland Garros.

No. 12 Flavia Pennetta of Italy also lost, while No. 8 Angelique Kerber of Germany and No. 18 Eugenie Bouchard of Canada won.

In the men's tournament, both Roger Federer and Novak Djokovic made it through to the third round.