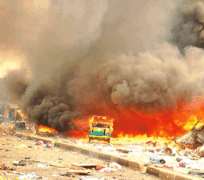 The Igbo community in Jos, Plateau State, said that it lost 36 members while 42 others were injured in the May 20 twin bomb blasts that rocked the Jos market.

The Eze Igbo in Jos, Prof. Jerome Obilom, who addressed newsmen on Monday, said that the community abhorred the mass burial, allegedly being secretly conducted by the state government, without informing members of the community since Ndigbo did not favour burying their dead outside their homestead.

He also said that many of its members were still missing even as it bemoaned the loss of goods worth millions of naira by the Igbos.

Obilom said that the authorities of some hospitals had been very hostile when the community, led by the Chairman of the Igbo Community Association, Chief Jonah Ezekwueme, visited to identify victims of the blasts, who were of Igbo extraction.

He said, 'While recognising the fact that some of the victims were shattered into shreds, which necessitated that some body parts needed the mass burial, we still insist that Ndigbo in Jos should have been consulted to identify their own because it is not our customs to bury our dead outside our traditional homes.

'We therefore condemn such act and implore the authorities to allow Ndigbo access to the bodies so that those missing could be accounted for because if we had been allowed inside the mortuary, we would have been able to identify many of our members who were unfortunately caught up in the bomb blast.'

He said that the community had been able to identify the dead through towns and community that took the roll calls of their members.

The Ezeigbo deplored a situation where Ndigbo were neglected in the distribution of relief materials and urged the authorities to send such materials to aid the victims and their families.

He also asked the Plateau State government to hasten efforts in the relocation of street traders to the satellite market in the Rukuba Road area of Jos, adding that the congestion caused by the traders along the busy road was responsible for the heavy losses caused by the bomb blast.

'While we appreciate all efforts being made by the state government to sanitise the market, we plead that government should strengthen the satellite market and move all traders there so that bombers would not have any easy means of causing mass harm as they did in the last incident,' he added.