GUN IN THE CHURCH 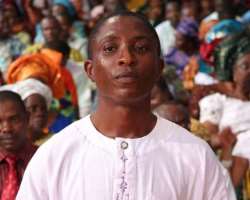 man with gun
Listen to article

“If the anointing of God in our life is not genuine, these are the people that will terminate our life.”

These were the words TB Joshua uttered on Sunday 25th October, 2009 after removing a gun from a man who had come out in response to a prophetic message m inutes earlier.

Yes, it is prophecy time during The SCOAN live service, where viewers worldwide watch as the prophet calls out different cases, often detailing even their name and physical appearance. Little did 41-year-old Mr. Progress Lampard from Delta, Nigeria or those around him know that he was soon to be exposed. Then came the unmistakable voice of the prophet: “There's a brother – you have a weapon in your hand – gun. You put on white”.

The crowd watched intently as Mr. Progress, dressed in white, came out and walked towards TB Joshua. In what was more a spiritual disarmament than a physical one, TB Joshua took the gun and more importantly delivered the man from the spirit that had been controlling him. As the prophet explained, it was not the weapon but the spirit behind it that made him an armed robber.

After Progress' deliverance, he spoke out and explained that he had had the gun since 2000, when he bought it with the express purpose of killing his father who had abandoned him when he was just three years old - in 1971. After ascertaining from his mother that his father was from Benue, Nigeria, he set off. “I bought this gun. I said, 'I'm going to look for him. When I see him, I will kill him' ”. Having failed to find his father, Progress returned to Delta where he explained that, “the spirit of destruction, killing, armed robbers, molesting people came upon me”.

During this time Progress, an armed robber, also described himself as a family man, stating that he had 13 children from 5 different wives.

It was after watching Emmanuel TV in Delta, where he saw other armed robbers being delivered and receiving their freedom, that he was compelled to travel to Lagos to visit The Synagogue, Church Of All Nations for himself. It was there on his first visit, seated amongst the newcomers, that TB Joshua had given the prophecy about a man with a gun, dressed in white.

After testifying to his deliverance, Progress spent a week within the church premises and the following week, 1st November 2009, attended another service. As he explained his case and how he was unable to provide school fees for his children, TB Joshua addressed the congregation and viewers saying, “Forget about the past. Whatever he might have done, leave it for God.” He then proceeded to present him with a gift of 200,000 naira and 6 bags of rice to support his family and send his children to school.

Thousands watched as the ex-armed robber blinked back tears of joy as he held in his hands the 200,000 naira and a copy of the Bible. “I am talking to those living the same life I was living before. Why don't you take the same step I have taken today? Come to Jesus. He will accept you as He did me. He will forgive you your sins and restore you back to normal life.”

As the congregation rose to sing a song of thanksgiving, I'm sure it must have crossed the minds of those present and those watching around the world – “If not for that prophecy, could he have left that life? Or more importantly, would that spirit have left him?”

The power of prophecy in the life of Prophet TB Joshua is a powerful catalyst in the ministry of reformation – where, after prophetic revelations, prostitutes, armed robbers and cult members respond and receive deliverance, freedom and a new life.