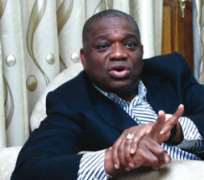 Former Governor of Abia State, Dr. Orji Uzor Kalu, said that if the issue of Boko Haram insurgency is not properly handled, President Goodluck Jonathan might be the last president Nigeria will ever have.

n
Kalu, who spoke on Thursday at the Murtala Muhammed International Airport (MMIA), Lagos while arriving from the United Kingdom, was apparently playing to the spiritual predictions that Jonathan might be Nigeria's last president.

Kalu told newsmen that the the problem of Bokom Haram concerns not only the President but all Nigerians, pointing out that one of the major ways of resolving the problem was for Nigeria to collaborate with international organisations and countries in fighting the terrorists.

n
He said, 'Well, when I was travelling precisely on the 26 of April. I left this airport and I spoke to the airport correspondents and I said there was a need to collaborate with international organisations.

n
'You see, this issue is not about President Goodluck Jonathan. If we don't take time and work together as Nigerians, Jonathan might be the last Nigerian President.

Jonathan might be the Gorbachev of Nigeria. And that is the truth, so we better wake up.

Political class, business class, military, civilians must now stand up to work for our internal security.

n
'Internal security is more important than anything we have done and I believe that once we are able to come together Nigeria will be alright.

Nigerian people should take what is happening seriously and I am surprised that the political class and the private sector are still joking with this matter.

n
'Those girls kidnapped are our sisters; they are our daughters. It is because none of us has lost anybody that is why to some people; it is looking like a joke. We should stop taking this as a joke and take the matter very seriously in order to move forward'

The former Abia State Governor further stressed that the country could disintegrate if Nigerians don't come together to fight and protect the unity of the country.

'We should not lose what we have. We should be able to come together as one family and fight because if we don't take time; I repeat it for the second time, Jonathan will be the last president of the name Nigeria' he added.

Kalu would have want the Federal Government to negotiate with members of Boko Haram on the release of the Chibok girls, saying that that the lives of the girls were greater than any other consideration.

n
He also supports the evolution of a strong and virile opposition party, saying it was good for democracy.

'It is good for every government to have a good, healthy opposition. People say APC is saboteurs party, I don't agree with that. In a healthy democracy, there is supposed to be criticism. I want my party the PDP to stand up. It is only in viable opposition that leaders will stand up. Leaders will be sleeping when there is no opposition' Dr. Kalu affirmed.