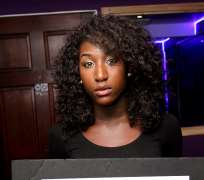 Over 7 weeks ago in Chibok Borno State Nigeria, innocent school girls were kidnapped overnight by terrorist and we still do not know their whereabouts.

The unfortunate situation has touched millions around the world and now 13 UK based Nigerian, Southern Africa and Sieraleonian artists are lending their voices to the #BringBackOurGirls global campaign.

Executive Producer of 'SistasUnite, singer May7ven beckoned on her fellow African female stars to join her on the track which included Ezi Emela, Shiikane, Honey B, Vicky Sola, Zafi B, Mrs Melodey, Amal Fashanu, Waliyah, Fay Roux, Ada Snoop, Belinda, SaFfie who have all spoken through music to address their points. Their protest included lobbying at the Nigerian embassy on the 9th May and again joining the #WeMarchForOurGirls group lead by Amour Awo to deliver a petition to number 10 Downing Street on Saturday 17th May 2014.

'Sistas Unite was inspired by a vision of women (sisters) coming together and uniting to deliver the message on serious issues and some of the matters affecting women in Nigeria, Africa and even throughout the world today' Says May7ven.

RADIO PLAY
The Charity single 'SistasUnite' was premiered on DJ Abrantee (CapitalXtra) Afrobeats Show Live last weekend and was also supported and played by DJ Neptizzle last night as he opened his show with the track on Reprezent Radio prior to release. It was banging!

'Sistas Unite' produced by Mictizzle and Mixed by Osiki (Ozzy) of Triple O Productions at Misco Studios will be released as a charity song soon. We do hope you will join us and demand the world listen to what we have to say!

Founding partner of Sistas Unite and CEO of Sync Group, Daniel Sync says; 'I strongly believed that we could all do more using our brands and businesses to support the cause especially the UK Based celebrities and musicians whose voices transcends across multiple territories. This is something I strongly believe in and only too happy to support using my own platform and resources until we find these girls and our Government starts making changes'.

This project is a collaboration between May7ven Music Publishing and Daniel Sync (Sync MEDIA HOUSE).

We urge you to please circulate this song and message until these girls are found. We need more of your support. [email protected] Thank you.