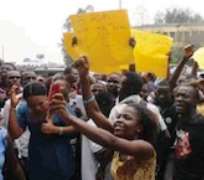 Students of Lagos State University Thursday evening caused gridlock on Ikorodu Road over the refusal of the state government to reverse the hike in school fees.

Led by the university's students' union, the students insisted they would not be cajoled out of the protest without achieving their aim.

Speaking to P.M.NEWS, the students' union Vice President, Oladele Olayemi Tosin, said it is unfortunate the government has pushed students to taking drastic actions in order to pay the fees.

'I can authoritatively tell you today that female students are going into prostitution to get the money. The money is too much. Lagosians need to see this protest as a means to achieve a collective good,' she stated.

The students stated that academic activities will not commence unless the Lagos State Government reduces the school fees.