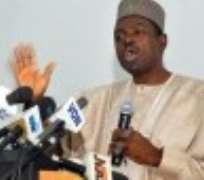 The Chairman of the 2014 National Conference, Justice Idris Legbo Kutigi, and other Principal Officers have dissociated themselves from comments by a delegate to the National Conference, Chief Okon Osung from Akwa Ibom State, that the 2015 elections should be postponed due to the state of insecurity in the country.

According to a statement by Akpandem James, Assistant secretary, Media and Communications 2014 National Conference, that though Osung has a right within the confines of the 1999 Constitution (as amended) to express his personal opinions on any issue of his choice, 'it has been observed that certain members of the public have come to view the personal views of the delegate as having something to do with the Conference. This is far from the truth.'

He said the views expressed by Chief Okon Osung regarding tenure extension for any elected official, based on any reasons cited by him, are entirely personal to him and must not be viewed or regarded, in any way, to have any anything whatsoever to do with the National Conference or any of its Committees.

James insisted that such views were never expressed on the floor of the Conference, which did not sit in plenary, as at the time the views were made public, adding that it was never heard, never debated or discussed in any manner whatsoever in any of the Committees whose reports are already with the management of the Conference.

Both the leadership of the Conference and the other 491 members only read about them in the media just as members of the public did, he said.

He further stated that such a position by Chief Osung was never submitted to any of the 20 Committees set up by the National Conference to deliberate on and make recommendations on critical issues that necessitated the call and eventual convening of the National Conference by the President and that none of these Committees either discussed or has made any recommendation or has even mentioned the issue of Presidential Declaration of a Moratorium in their reports as canvassed by Delegate Osung in the media.

'The National Conference, presided over by former Chief Justice of Nigeria, Justice Idris Legbo Kutigi, did not at any point make the issue of tenure extension for any elected official part of a term of reference of any of the 20 Committees whose work were already completed before Chief Osung's agenda was made public by him.

'Neither President Goodluck Jonathan nor any of his associates or aides both within or outside the Conference circle has made any representation directly or indirectly or has spoken to any member of leadership or delegate to the Conference on the issue canvassed by Delegate Okon Osung.

'Therefore, we are inclined to believe that Chief Okon Osung is acting on personal conviction or interest and is not, to the best of our knowledge, representative of any group participating in the National Conference. The only relationship Chief Okon Osung has with the National Conference is that he is one of the 492 delegates. Whatever views he is canvassing in this regard should be seen and regarded as purely his personal opinion which has absolutely nothing to do with the Conference, ' James said.

Chief Osung caused quite a stir when he called for a Presidential Declaration of a Moratorium at a press conference recently, saying that 'at this crucial juncture in our national history, a Presidential or National Assembly declaration of a politico-administrative moratorium or cooling-off period before the conduct of the third Transitional Elections scheduled for February 2015 has become an imperative necessity.