Jonathan, Tinubu to clash in Ekiti as state guber race hots up 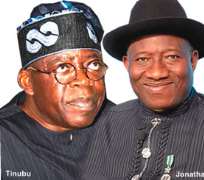 President Goodluck Jonathan as well as top opposition politicians in the All Progressives Congress (APC) will storm Ekiti State on today and Thursday to campaign for votes in the state governorship election billed for June 21.

While the President, according to the spokesperson for the Peoples Democratic Party in the state, Pastor Kola Oluwawole, will be in town on Thursday for the 'Presidential Flag Off' of the PDP candidate, Ayo Fayose's campaign, APC chieftains including ex-Vice President Atiku Abubakar; APC National Leader, Bola Tinubu, and the party's National Chairman, Bisi Akande, will on Wednesday hand the party's flag to its candidate, Kayode Fayemi.

Fayemi is seeking a second term while Fayose is campaigning to return to the seat he vacated in 2006.

The police commissioner in the state, Mr. Felix Uyanna, told newsmen in Ado-Ekiti on Tuesday, that he had deployed his men and officers to strategic locations to forestall any breakdown of law and order.

The two rallies would hold at the popular Oluyemi Kayode Stadium in Ado Ekiti, the state capital.

Uyanna, who spoke through the Command's Public Relations Officer, Mr. Victor Babayemi added that his men had also commenced a stop-and-search operation on all vehicles.

He said, 'The command has enough manpower to ensure that the rallies are held under a peaceful atmosphere. Once the protection of lives and property is our utmost duty, we are going to do all within our powers to curb any crisis that could lead to loss of lives.

'We have activated all the police units to be able to deal with any situation because we are not unaware of the personalities that will visit the state within the next two days. Our men from the Explosive and Ordinance Department had already commenced operation at the venue of the two rallies. They are combing everywhere as we speak.

'We are not going to limit our operations to this; we are also going to give adequate protection to all the hotels where some of these personalities will be staying. So, we are on top of the situation and we are monitoring situations very carefully.'

The police boss urged residents to go about their lawful business and to steer clear of trouble.

Meanwhile, the PDP has alleged that the APC had concluded plans to destabilise Jonathan's visit.

In a statement made available to journalists in Ado-Ekiti, Oluwawole alleged that Fayemi had mobilised thugs and members of his party to foment trouble in Ado Ekiti metropolis to create an impression that 'the President is not welcomed in the state'. â€' Punch.