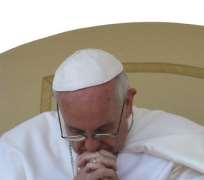 Twenty-six women who say they are in love with Roman Catholic priests have written to Pope Francis urging him to make celibacy optional reports timesofincia.com.

The women, who all live in Italy, described the 'devastating suffering' caused by the church's ban on priests having sex and marrying.

'We love these men and they love us,' they said in their letter published on the authoritative website Vatican Insider.

'With humility, we place at your feet our suffering so that something can change, not just for us but for the good of the whole Church,' they added in the message, signed with their first names and an initial of their last names, but with several phone numbers.

Priestly celibacy in the Roman Catholic Church, while not a unchangeable dogma, is a tradition going back more than 1,000 years.

In recent decades the Vatican has come under pressure to make celibacy optional and allow priests to marry, with supporters saying that this would help ease the acute shortage of priests in many areas.

The women asked the pope to 'bless our love,' adding that few people could understand the 'devastating suffering lived by a woman who has a strong love for a priest'.

The Church teaches that a priest should dedicate himself totally to his vocation, essentially taking the Church as his spouse, in order to help fulfil its mission.

But the women told the pope that their men would be able to serve the Church 'with greater passion' if they were supported by a woman who loves them and children.

This was far better for the priests and the Church, they argued in the letter sent to the Vatican, than 'a life of continued clandestineness, with the frustration of a love that is not complete'.

The women asked to meet the pope to explain the plight 'tearing apart our souls' because the couples were faced with the alternatives of either the men leaving the priesthood or carrying on the relationships in secret.

Proponents of optional celibacy in the Church have linked the sexual abuse of children by priests to its celibacy rule, saying that it could stem from sexual frustrations.

But the Church has rejected this argument, saying that paedophilia, whether in the Church or outside of it, is carried out by people with psychological problems. Priests are allowed to marry in the Anglican and other Protestant churches as well as in the Orthodox Church.