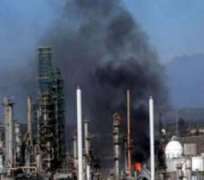 The Movement for the Emancipation of the Niger Delta has claimed responsibility for the explosion around the Port Harcourt Refinery Jetty on Sunday.

MEND, in a statement released on Monday by its spokesperson, Jomo Gbomo, said the attack on the pipelines was part of its ongoing operation codenamed 'Hurricane Exodus'.

Dismissing claims that oil thieves and pipeline vandals were responsible for the explosion, the militant group said that the facility was infiltrated by some of its fighters with the aide of agents within the Nigerian National Petroleum Corporation.

MEND pointed out that a thorough investigation into the incident would reveal some fragments of explosives similar to the ones used in the Warri Refinery explosion on October 22, 2013.

'The Movement for the Emancipation of the Niger Delta takes responsibility for the sabotage on Sunday, May 18, 2014, on the Nigerian National Petroleum Corporation Refinery Jetty pipelines in Okrika, Rivers State of Nigeria.

'This attack is in line with our ongoing operation 'Hurricane Exodus', which was intended to bring down the entire refining facility. This facility was infiltrated by a few of our fighters with the aid of our internal agents within the NNPC.

'This is contrary to speculations that the sabotage was carried out by pipeline vandals and oil thieves, which is a very convenient phrase used in shielding the truth from the public.

Explaining that the attacks on the Nigerian oil industry would persist as a result of the inaction of President Goodluck Jonathan.

'We will persist with our attacks on the Nigerian oil industry due to the inaction of President Goodluck Jonathan who continues to rely on an unsustainable and fraudulent Niger Delta Amnesty programme, which is only a guise to line the pockets of Goodluck Jonathan, his wife Patience, Jonathan's cronies and members of the Amnesty Committee whose sudden wealth remains unchallenged by the Nigerian media.

'The entire amnesty process is a fraud on the people of Nigeria who are being promised peace in the Niger Delta, in the absence of justice. 'Hurricane Exodus' is still on course,' the militant group added