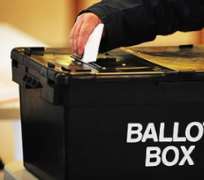 Tomorrow, Narendra Modi of the Bharatiya Janata Party will formally take over from Manmohan Singh, the incumbent, of the Indian National Congress, as India's 14th prime minister, following his electoral victory last Friday. In an election that comes across as a befitting advertisement for participatory democracy in developing countries, the opposition BJP inflicted the worst electoral defeat on the ruling Congress party, winning an absolute majority of 282 out of 543 seats.

Quite unlike in Nigeria's rigged democracy, where incumbent political office holders would rather go to desperate lengths to perpetuate their hold on power, by hook or by crook, the ruling party in India was able to win only 44 seats out of the 543 seats contested. India deserves top marks for this political feat.

Through years of persistence, the South Asian country has got to the stage of telling the world that, with painstaking planning, and commitment on the part of all the stakeholders, it is possible to hold free, fair and acceptable elections in a developing country that can compare with what obtains in advanced democracies such as Britain and the United States of America.

Religious and caste-related violence, ever present even after the violent breakaway of Pakistan at independence, has often shaken the country to its foundations. Assassinations, riots and occasional armed insurrections have tested the ability of the diverse peoples, sects and faiths to stand firm as one nation. Sikh separatists murdered Indira Gandhi and her son, Rajiv, who were INC leaders and prime ministers. Add to these   Maoist insurgencies, violent separatist rebellion in Jammu and Kashmir, and unresolved territorial disputes with China and Pakistan and terrorism, financed and nurtured by its arch rival, Pakistan. Through it, the INC has managed to hold on to power for most of the country's 67 years of flag independence, except for brief periods when BJP and others won slim majorities.

The road to the BJP's rousing victory reflects the tortuous path of this diverse nation since it attained independence in 1947. Since its founding fathers put in place a secular constitution completed in 1950, India has weathered threats to its secularity, democracy and civil liberties, nurtured by its dynamic courts and an independent press.

Modi's optimism was, however, infectious. According to Forbes, the American magazine, Modi ran on a platform of fundamental economic reform, promising to do for all of India what he accomplished as chief minister of the western state of Gujarat, where with liberal policies he engineered a boom. In his electioneering, Modi's message was, 'I am from among you, understand you. I know your hopes and dreams and disappointments.' The emergence of Modi, 63 as prime minister, means a break in the near total hold of the Congress on India's polity since 1947; and also a rupture in Nehru-Gandhi dynastic control of India's politics.

With this election, India, which prides itself on being the largest democracy in the world, continues to show the world that where there is the will to succeed, not even the size of the population can constitute a constraint. For a country that boasts over 1.2 billion population, and a massive 814 million eligible voters, the marathon election that spanned a period of five weeks and attracted 551 million voters, was historic by all standards.

For Indian politics, the prime loser was Rahul Gandhi, heir of the powerful Nehru-Gandhi political dynasty, who would have been prime minister tomorrow, had his party been successful at the polls. Misrule and unimpressive economic management by the Congress have robbed him of his political inheritance. Prices of basic foodstuffs have been soaring beyond the reach of the poor, while scams in public service became a recurring decimal.

For other democracies, particularly Nigeria, the world's fourth largest democracy, the BJP's electoral success is a wake-up call. It is even more relevant to Nigeria, a country that is already crying out for a strong opposition. While BJP offers Indians an alternative platform, the outlook is as bleak as ever here. The opposition has not shown itself worthy of the name. The pursuit of national interest does not weigh above ethnic and religious polarisations. The story of Nigerian democracy is that of plundering in gangs. From the local, through state to the Federal Government, political parties and politicians see politics as a means of having access to filthy lucre. The Nigerian electorate is not without blame either. The 551 million voters, who queued for five weeks to elect their representatives, endured the pains to make the statement that the country needed real change without any form of inducement.

Unlike in Nigeria, where the political elite play the game with the blood of the electorate, the ruling party conceded defeat as the votes were still being counted. 'Trends of the counting are certainly not in our favour. The trend points out that the country has decided to vote against us,' the INC spokesman, Shakil Ahmed, said. The party's leader, Sonia Ghandi, was also gracious in defeat.

This is critical as the BJP is the opposition, defeating the incumbent in an election that had 130 million more voter-turnout than the 2009 poll. The magnitude of Modi's victory would have been interpreted as rigging in Nigeria and a swift declaration to head for the Electoral Tribunal. We have had this setback since 1999.

Nigerians must be ready to make hard choices now. It is argued that nations thrive when they develop 'inclusive' political and economic institutions, and they fail when those institutions become 'extractive' and concentrate power and opportunity in the hands of only a few. What Nigeria needs above all else is a government with sufficient credibility to deal with the country's growing security and economic problems and to heal the social fractures caused by 15 years of misrule.

With India showing the way, that need is greater now than ever.