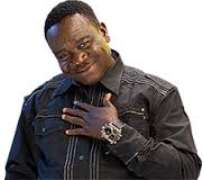 You're a veteran in the industry, when did you start acting?

First of all, my name is John Okafor, Mr Ibu and I hail from Ezeokwe in Nkanu West Local Government, Enugu State. My first experience on camera was 1978 December 3. It was a soap opera in Benin City. A soap opera they called Hotel de Jordan. I was just a passerby and then they called me to be part of it, part of the crowd. My face wasn't even showing but I was comfortable, I was contented being part of that big work.

Why did you decide to become an actor?
That is the bone breaker. I had nothing in mind before when all of us were in school, from elementary school to secondary school. Then I didn't really have something in mind I was going to be but I know I was having medicine in my mind. At the end of the day, when I came across the camera, I was so crazy about watching people doing things on television. I said well maybe I will diversify and that's exactly how I found myself here

How has your acting career been so far?
The career has been so interesting and we're enterprising. Very fantastic, I must confess. The industry has made me 99.9% of who I am today. It's a very wonderful constituency and I am happy to be a part of it.

In 2006 also, I won it, organized by Virgin Productions or something. It was all about national thing. So I won it two times consecutively 2005 and 2006 and then my film was the best film of the year that same year. Other awards, I have City people awards, a whole lot of them. I have plaques in my house.

What is the name of the movie you're shooting now?

Well, the reason why we don't want to expose the name of the movie is because we have virus in the industry and this virus which is piracy, means we try as much as we can to make sure we conceal the title of the movie otherwise, once they get hold of the title, they would go further before we even start.

You've been in Nollywood for a while now. What is your general view of the industry?

The industry is not really giving us what we expect now because when we started with the heavyweights, there was a lot of network guarding the industry. But unfortunately as the thing proceeds like this, we begin to discover that people who are not supposed to be in the industry are here and they are making the whole journey very steep for us. However, we believe in God.

The industry has not stopped. We are still going further and the more we go further, the more we learn more things and we are beginning to use more than one camera in a production unlike before, we used only one camera. Today, we can use like 2, 3. The white men, they use like 100 cameras, 50 in one production. I was involved in one in Germany, we used 20 cameras at a role. However, I'm not trying to measure or probably compare our own production with them but the issue is that we are growing

If you could change one thing in Nollywood, what would it be?

I will definitely change the system of distribution because the distribution system here is very poor. We have only 3 major outlets while we have about 36 states and FCT. If you do a movie and an approximate of about 3,000 copies are sold in each of the states, count how many you're going to sell. But we are bent on buying the pirated copies and then trying to view it for free, waiting for DSTv to show it and all that, so it is actually dragging us down.

You recently celebrated the dedication of your first son?

That's not my first son, my first son is 24 years, my second son is 21 and the other one is 19 and then my smallest son is almost a year.

So you have 4 kids total?
4 boys. It was 5 but I lost one to kidnappers.
What attracted you to your wife?
She's beautiful, face of Imo State then. So I decided to look for beauty because I want to see a contrast

What More should fans expect from Mr Ibu?
I'm still on location. I'm still doing what I'm doing. Let them keep praying and I will never disappoint them by the special grace of God and I'm advising those who are greedy, who are coming to the industry all because of money, come into the industry, work on your face first, discover who you are in the industry, learn, ask questions, get the proper thing to do then before the money would come in.

You won't even know when the money starts coming. And then I advise those girls that pay for roles, if you're one of those that go to producer, director to give money to get roles, you will never get out of this industry. You will never see the light of the day. Leave that thing. Go ahead and allow God to give you your own position in the industry. Keep doing what you're doing. The one that is yours is yours, the one that is not yours, forget about it.

Do not go and give your body because of roles. Do not go and give money because you want to get a role in a production. That is not how the industry grows. If you pay, they will give you something you're going to do, you're not going to be anybody. The industry is like a spirit. They will reject you immediately you begin to pay yourself in.