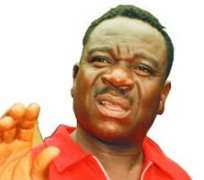 Oh yes, in the latest movie, Hypertension, that would soon hit the screens, the actors showed the stuff they were made of by acting like hypertensive actors.

From the stable of Julam International Production, other equally talented acts in the laughter-filled work of art are the duo of Charles Awurum and Andy Chukwu. The latter also doubled as the hilarious flick's director.

Shot on several locations within and outside the Lagos metropolis, the comic flick captures the antics and foolishness of three mischievous guys who embarked on a journey to marry the most beautiful women in the country.

"The movie is captivating, intriguing and filled with suspense and laughter. It revolves around a group of foolish friends, who always dream and fantasise about marrying beautiful wives despite being very ugly. They also dreamt of marrying busty women who would be big enough to sire the number of children they'll love to have," Chukwu said about the movie.

Speaking on why he chose to invest in the comic thriller, Mr. Austin Orji, its executive producer and the head of Julam International, explained that his love for Nollywood, as well as the story line of Hypertension got him attracted.

"This is my second production in Nollywood and I hope to do more because I love and believe so much in the industry. Investors should not fold their arms and criticise from outside; they should come in fully and help make the industry better. I want to assure movie buffs that with Hypertension, we are going to make a bold statement in Nollywood. It is also our Easter gift to all movie buffs."