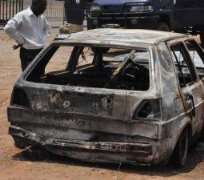 A car bomb on Sunday night rocked a drinking centre on Middle Road by Gold Coast Road in Sabon Gari Area of Kano State,  killing scores of people including the suicide bomber.

Sabon Gari is a largely Christian neighbourhood of Nigeria's second most populous and mainly Muslim city of Kano.

Associated Press quotes a Police Superintendent Aderenle Shinaba as saying that the car exploded before the bomber reached his target of the busy restaurants and bars lining Gold Coast Street, indicating the casualties could have been much higher. It was unclear if the bomber was among them.

According to reports, the Golf car allegedly used by the suicide bomber shattered into pieces while the windcreens of other vehicles near a storey building at the Gold Coast junction were also shattered

The Sabon Gari Christian quarter is a popular area where people dine, play games, dance and drink alcohol late into the night – all anathema to the Islamic extremists blamed for previous attacks in the neighbourhood.

Multiple blasts in Sabon Gari – the name means “Strangers' Quarters” in the Hausa language – killed at least 24 people in last July and a suicide bomber drove a car laden with explosives into the neighbourhood's bustling bus station in March 2013, killing at least 25 people.

Alcohol is forbidden under Shariah law that holds in the largely Muslim city but authorities generally turn a blind eye to the Christian neighbourhood and hotels.

Previous explosions have been blamed on the Islamic extremist group Boko Haram that claimed responsibility for two explosions last month in Abuja, the capital in the centre of the country, that killed more than 120 people and wounded more than 200.

World attention turned on the group with its mass abduction a month ago of 276 schoolgirls whom it is threatening to sell into slavery if the government does not release detained militants.

Officials say Nigeria will not swap the girls for detainees. Several countries including the United States, France and Britain have sent military experts in surveillance, intelligence gathering and hostage negotiation to help bring the girls back home.

Nigeria's 5-year-old Islamic uprising has killed thousands with attacks increasing in frequency and deadliness this year despite a year-old state of emergency.

More than 1,500 civilians have been killed in the uprising so far this year.