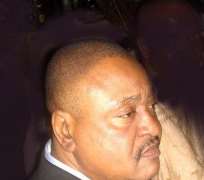 President of Association of Nigerian Theatre Arts Practitioners (ANTP), Prince Jide Kosoko, was 56 on Tuesday. He spoke with nollywoodgists.com about the journey so far, the forthcoming association's election and other issues

Q: Congratulations, how do you feel at 56?
A: I feel so happy and grateful to God Almighty for sparing my life. Despite all the challenges, I am still alive.

Q: Looking back, what have been your ups and downs?
A: Like I told you, there are lots of them. Well, let me tell you this, when I look back, there are some people we started together but who are no more and this makes it enough for me to know that the Almighty God is doing wonders in my life. I started as a small boy when my parents did not allow me to go into acting. In fact, as at that time, most parents didn't want their kids to go into acting. As you are aware, I started in 1964 at age 10, you know what that means, I was a bit on the rascally side, so I had to sneak from home to partake in productions. So, there were challenges that I had to beat my parents to the game, among other things. And when I eventually formed my own group, there was a particular time that I was to stage my first show in 1972 and just a night before the production, the manager of Mukaila Oladipo just gathered key members of my group and left unceremoniously, to form another group. you know what that means, but as God will have it, I still staged that production. Do you know what I did, I just moved to an existing theatre company and asked them for the productions they had and meanwhile, we had pasted posters about the production entitled Oju Eni Maa La. when I was given the productions they had, the story line was close to mine and we did the rehearsal overnight. I used their equipment and still staged the show. Even the manager that left came to watch the show and that was the first time my father watched me on stage with Alhaji Femi Okunnu as the chairman of the occasion. My father later gave me his blessing and support.

Q: A lot of people are of the opinion that you started with the late Ojo Ladipo a.k.a. Baba Mero's group, how true is this?
A: No, I did not start with his group, I had my own group then.

Q: What brought you to his group?
A: When he Baba Mero was alive, we were very close because we both belonged to the same association and we rehearsed in the same place, that is Sunny Q Club. His group rehearsed in the morning being a professional group, while mine was in the evening because I worked in Apapa then. So, when he died, I played a prominent role during his burial and I started to realise that Bello, that is Adebayo Salami, could step into Baba Mero's shoes. He was doing fine and the group was getting stronger than mine, so I felt like borrowing some idea from the group and therefore featured as a guest artiste in the group.

Q: How did the idea of the pidgin English role you played then came into being?
A: It was their own production.

Q: The late Ojo Ladipo is a forgotten hero, why is this so?
A: I beg to disagree, the group he left behind is still there, the products of the group like Bello, Aluwe and others, are still doing fine.

Q: What about the family?
A: Now, there is no member of his family in the acting profession. If there are, you would have seen them.

Q: Looking back, you started with travelling theatre group, why is such no longer existing?
A: There must be development, it is rather unfortunate that the development took us away from stage plays and we are all making efforts to revive it.

Q: How soon will that be?
A: As soon as practicable.

Q: As the outgoing ANTP President, when are you leaving office?
A: By 28 February, I am out of office.

Q: Dele Odule and Victor Ashaolu are contesting, what is your view about these two people?
A: It is normal in any organisation. When a position is about to be open, you will see people showing interest. I am an arbiter and interested in ensuring that my back is good enough and as such, I am trying as much as possible not to look like a one-sided leader. I believe the two candidates are good and pray to God to give us a good leader.

Q: How will you assess the two?
A: At this material time, I think that is very difficult for me to do. Let the members decide.

Q: Dele Odule was your deputy, how did he perform?
A: He is still my deputy and he performed well.

Q: What of Ashaolu, who at one time fought the association?
A: Ashaolu is a bona fide member of the association and has every right to contest. He is good as well.

Q: Lately, there have been series of blackmail making the rounds via campaigns, what is your view about this?
A: I have been informed and I saw it by myself. I believe it is not good enough for the interest of the association. I have called the two caucuses to warn on this development. In fact, another contestant named Andy Abuede has joined them. I have also called the elders to talk to them. But if they continue the blackmail, I will not hesitate to tell members that we don't have good leaders so it is better for them to maintain peace.

Q: If there is a deadlock, will you extend your tenure?
A: By virtue of the provision of the constitution, I cannot extend my tenure and will not do that for one day because I don't want crisis at all. ANTP is a traditional association and that culture of respect is still there.

Q: As the outgoing president and a human being, you must support at least one candidate?
A: No, I want to be as neutral as possible. Whatever I have will be expressed through my vote.

Q: From ANTP, where next?
A: I have said it times without number, that I want to move forward to where I will be more useful to my constituency. I have realised that except we are close to the people in government, they will not know the importance of our role in the society.

Q: As a professional actor, what have you lost in your home front?
A: I am a very good family man, whenever I go, I ensure that I return home promptly, except when I am outside Lagos. But when I am in Lagos, I come back home and play with my children. I am a complete family man.

Q: To date, how many wives and how many children do you have because I know that you are a polygamist?
A: I have two wives and children.

Q: Are those the two you started with?
A: You have asked me and I told you I have two wives, any other things, I have put behind me.

Q: How do you cope with two wives and kids?
A: My joy is seeing my kids grow, make progress, graduate from universities and get married.

Q: People are of the opinion that you old artistes are diabolical, how true is this?
A: I don't believe in it because I am not, I believe in the Almighty God. Don't forget that the business we do is like a cooperative society, we eat and drink together on set. We wear each others clothes on set, so it takes two to tango, we work collectively, while some of us are even close to our colleagues than our immediate families.

Q: You acted in Palace, a Taju Adepetu production. What happened to the soap?
A: Well, what I gained from Palace is the experience, because most of the things we do in Palace, Tunji Bamishigbin wrote the script on set. It was where I developed the talent of memorising lines fast.

Q: As an insider, why was the soap rested?
A: You need to ask Tunji Bamishigbin or Tajudeen Adepetu.

Q: Before, we used to have 13 episodes of Arelu, Ajala and Palace, among others. What happened to them?
A: You will agree with me that the issue of sponsors is very important in any production and if they don't come, what do we do?

Q: You have acted in English and Yoruba movies, how do you see the two?
A: It is the same acting and the difference is the language. Acting profession is the same all over the world. Even if I understand Latin, I can act with it.

Q: Which pays your bills better?
A: Paying of bills is no big deal, there are some productions in English that pay better than Yoruba, while some in Yoruba pay more than that of English.

Q: What have you gained from ANTP?
A: Well, I have been able to know some people in power and experience on the management of human beings.

Q: Financially?
A: That is zero.

Q: Any lesson from AGN crisis?
A: You can't compare my association to theirs. Mine is a traditionally formed association, we have a way of doing our things that leaders are respected, but that is not to say that you don't have the right to your own opinion.

Q: Four years to 60, what are your plans by the time you attain that age?
A: I don't plan, it is only God that plans for me.

Q: So, there is sex abuse?
A: Some untrained actresses flaunt what they have to get roles and when they get to the top, they start saying that there is sexual harassment.

Q: Have you experienced such?
A: You don't dobut me, I am highly disciplined although I am not a saint, you are part of us, ask my colleagues.

Q: Have you rejected sex for a role?
A: I am too expensive for that.