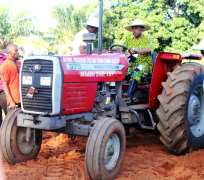 Anambra State governor, Chief Willie Obiano launched what may be called an agricultural revolution, Thursday, when he flagged off the 2014 farming season at Nteje, Oyi Local Government Area of the state, declaring that with that ceremony, he had symbolically lighted up the fire of agro-revolution in the state.

Addressing a mammoth crowd of farmers who turned up with various farm produce and livestock to mark the beginning of another bountiful season, Governor Obiano explained that the theme of the ceremony, 'A New Dawn for Agriculture in Anambra State,' was carefully chosen to reflect the attitude of his administration to agriculture.

According to him, from time immemorial, 'our ancestors judged a man by the strength of his arm. A man who could not feed his family was regarded as an efulefu! A failure! That tells us how important farming and agriculture in general was and will always be to our people. This is also a major reason why Agriculture occupies a pride of place among the four pillars of my economic blueprint.'

Describing Anambra State as a blessed state, Governor Obiano further said, 'In the last two days, I have travelled around the food-belt of the state from Anam through Nsugbe to Nando, Ayamelum and finally Nteje. I was fascinated by the vast stretch of arable land that cuts across the eco-diversity of our state. And I was re-assured that our choice Agriculture as a major pillar of my administration was the right choice.'

He further observed that all over the world, agriculture was regarded as a major employer of labour, and that informed his decision to inaugurate a Special Committee on Agriculture with a charge to draw up a blueprint for revolutionizing agriculture in the state.

For greater clarity and focus, he said he had to give a clear direction to the committee to ensure that the state becomes one of the three top states in agricultural production, ranks number one in production of rice, cassava and fish in the first 4 years of his administration and finally ensure that agricultural output contributes at least 40 percent to the Gross Domestic Product of the state.

According to him, the Committee had submitted its report and it was being reviewed, stressing that over the coming few weeks the state would draw from the recommendations to roll out specific initiatives, including mapping out of a land bank for high yielding crops that would give comparative advantage to the state.

He maintained that in specific terms, the government would force the door of agricultural productivity open in the state, pointing out that his administration had held several consultations with local and foreign investors with the prospects becoming brighter with each passing day.

This he said was the reason he had to receive a delegation from a Vietnamese Joint Stock Group that had indicated a strong interest in investing in the state's agricultural programme.

'I have also held fruitful deliberations with the Federal Minister of Agriculture, Dr. Akinwunmi Adesina and I am confident that the world will soon pay a closer attention to what we are doing in Anambra State,' he further revealed pointing out that he was entghused that big-time indigenous investors like Cosmas Maduka and Emeka Okwuosa had also indicated interest in investing heavily in the agricultural sector in the state.

Calling on Ndi Anambra to make necessary adjustments that would encourage investments inflow into the state, governor Obiano observed that his administration would need the cooperation of all the land owners in the agricultural belt of the state to ensure the availability of land for the mechanized farming his government was planning.

He appealed for the cooperation of all for the newly formed Committee for Land Acquisition and Mediation which he inaugurated the same day, saying it would ensure that all issues concerning the availability of land for investors in agriculture are perfectly handled to the satisfaction of all parties.