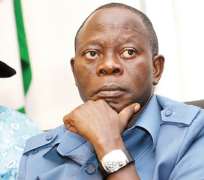 Edo state is part of the oil region of Nigeria and has been in the news recently for the wrong reasons. The politrics of 'one man, one vote' mantra of Governor Oshiomhole has now become one man ,one show .Also, in the anal political history of Edo state, a new phraseology has been given to the state ' go and die' due to the insensitivity of the state governor to the plight of the down trodden people in the state as regards the recent out burst of the governor against the working class widow. A governor widower vs a working class widow of Edo state. Hence these unsavoury incidents necessitated this discourse.

Edolites and indeed majority of Nigerians both at home and in diaspora including this writer, have always perceived Governor Oshiomhole as a true democrat, effective ex-Labour Leader and politician of a different specie who not only represent Edo working class but Nigerians working class as a whole. Hence, Edolites and Nigerians expects Governor Oshiomhole to have been circumspect in his political and moral dealings with the people of Edo state and Nigeria at large.

The recent events in the state as regard the above ugly development of a widower governor telling another working class widow to ' go and die' because the widow in question violated the street law trading and in-spite of the woman's plea for leniency and gave the reasons among many, that she is a widow who has recently lost her policeman husband in the line of duty and need to fend for her children and household, the governor was not ready to listen and show compassion on the woman but rather asked the woman to go and die . Edolites and indeed Nigerians are beginning to ask questions if our leaders really care, considering Nigerian politicians utterances, arrogance and flagrant abuses of power by our leaders.

The recent hijacked of the 200 innocent school girls in the Northern part of Nigeria though sad and portray bad image for Nigeria, could to an extent, be attributed to the insensitive undemocratic utterances of some of our leaders who at all cost wants to blackmail president Goodluck Jonathan and portray him as a weak and bad leader. Nigerians both at home and in diaspora know who their true leaders are and pray for the safe release of these innocent girls .Nigerian people look forward to an all inclusive holistic approach to curtailing the menace of insurgency in the country.

While nations and celebrities around the world are concern about this unwelcome development and have been working with Nigeria government to seek the release of these girls, Nigerians are still waiting to see opposition party like APC and its leaders making meaningful suggestions and working with President Goodluck Jonathan to curb the menace of Boko Haram insurgents in the North, no wonder the ' go and die' mentality still suffice within the rank and file of APC opposition party.

President Goodluck Jonathan is well aware of the precariousness of human lives in the country and is working with well meaning Nigerians and foreign partners to ensure the safety of these innocent school girls. Nigerians expect the governor of the state where this incident happens to do more in protecting lives and property hence, Federal government should stop the security vote money running to billions given to this state and any state with security lapses until such state/s hold grip of related security issues within their states. It could be argued that while some states in Nigeria like Akwa-Ibom, Delta, Cross-River, Ondo, Anambra, Eboyin, Lagos to mention a few have embark on measures to protect their states and witnessing some developmental strides , Edo state today still lack basic infrastructure in most rural areas. The Governor only resort to cheap propaganda and where development occurs, it only happens in the capital.

Governor Oshiomhole is unconscious of the fact that there is different between being a Labour leader which requires diplomacy, a little bit of aggressiveness , understanding and compromise in fighting for the rights and good welfare of the people to being a governor of a state that requires team work, sincerity of purpose, transparency, accountability, visionary leadership and decorum to mention a few. The just concluded APC ward congress perceived by top APC Edo members to be flawed has been tearing the party apart in the state. Apolitical Edolites are beginning to question the true meaning of ' one man ,one vote 'of the governor and the sincerity of this phrase, now one man, one show in the APC Edo state.

Edolites and indeed discerning Nigerians, are beginning to wonder if APC as an opposition political party that pride itself as effective progressive party is truly and indeed progressive ,if the party can-not conduct free, fair and transparent elections in the state and their relevant states. Yes, the ruling party ,The peoples democratic party [ PDP] is the largest party in Nigeria and Africa which has its challenges just like any other ruling parties in both developing and developed worlds, the party has been magnanimous enough to accept these challenges and addressing them head on under the visionary leadership skills of the president, able chairman of the party , National Executive council members ,The national working committee members and all stakeholders of the party to reform and reposition the party for more electoral success both at the states and Federal levels with the ultimate goal of developing the country.

Edolites are now asking pertinent questions and taking actions as life under the present governor Oshiomhole APC in Edo state is becoming tyrannical and oppressive. Today, discerning Edolites are questioning the unity of our beloved state under the APC . Do Edolites get value for money for all the infrastructural projects the government under APC have embarked upon.? Why has the government of Oshiomhole not been honest to tell Edolites how much has been borrowed on behalf of the state government , from what source/s these monies have been borrowed , The terms of payment , duration of these loans and the true current financial situation of the state.

Edolites are uncomfortable with the present economic situations of the state as many progressive edolites are of the view that the state economy is in comatose. Industries like Edo brewery remained grounded. Average Edolites are being harassed and intimidated by those governing them. The governor known with his acidic tongue and accusations of godfatherism against true son of Edo state, ChIef Anthony Anenih, an icon, mentor and true nationalist leader and accusations against other notable sons and daughters of our beloved state is today being accussed of becoming an emperor who do not listen and acts arbitrarily no matter who is gored. Today , Edo state under APC government is witnessing dictatorial ,politics of maginalisation and politics of sectionalism.

Edo state is in dire need of a political â€'economic reform as the state economy has to be rejuvenated .Edo APC led by governor Oshiomhole has deceived Edo people with his politrics ,playing a dirty ,tribal and uncouth politics. Our leaders ,elders, respectful sons and daughters have not been appreciated but reduced to nothing in the state. It is unfortunate that Edo state one of the oil producing states in the Niger Delta region of Nigeria ,once a model and known for its prosperity ,hard work and a pride to the nation is today fading away fast and becoming a land of unmitigated disaster,'go and die' phraseology mentality and despair. A state historically laboured for and created by a direct vote by exemplary good distinguished Edolites on August 9, 1963 and perceived to be a land of milk and honey long time ago has today become delusional.This writer remembered the glorious days of Bendel insurance football club known for its football laurels and trophies.

Edo state known as offshoot of the defunct Midwestern Region and an envy of other states in Nigeria as it truly represented the heart beat of the nation today means the opposite. Progressive Edolites ,including this writer ,appreciate the vision and thank our founding fathers and mothers both dead and alive ,spearheaded by our most revered OBA of Benin ,His Royal Majesty ,Oba Akenzua ,who according to historians, writers and researchers played a pivotal role in the creation of Midwestern Region. Edolites also thank our present Oba ,His royal majesty for his fatherly role and astute leadership in the state. The vision and foresight of our illustrious sons and daughters like chief Humphrey Omo- osagie ,Late chief Anthony Enahoro[ a great patriot ] who moved the motion for Nigeria's independence from Britain , chief Okotieboh ,chief Omimi ejoh, chief Anthony Anenih [icon ,mentor and nationalist] ,chief Osaigbovo Ogbemudia,one time successful governor of the state,chief Nosakhere Isekhure,chief Mike Akhigbe, chief Tom Ikimi, professor Omo Omoruyi, Elder Odion Ugbesia [ Leader and senator of federal Republic of Nigeria], Chief Dan Orbih[ chairman PDP,Edo state] and a whole lot of other personalities and patriots that time and space will not permit me to mention in this discourse. Edolites both at home and in diaspora appreciates and thank you all for your courage ,love for the state and country.

The struggle for a united ,prosperous ,progressive and developed Edo state and Nigeria continues. Edo state in the 21st century needs leaders that are compassionate, de-tribalised, treat all the three senatorial districts of the state fairly, equitably and respectfully. A governor that listen and acts to the yearnings and expectations of the people. A leader with midas touch and work for the generality and progress of the state and country. A fair and visionary leader to save our people from the present political-economic doldrum . A leader that will concentrate and focus on governance , being pro-active and not waste unnecessary time and money in abusing our leaders and elders in the state. A leader that will work diplomatically and harmoniously with the centre to develop the state and country. God bless the good people of Edo state and Nigeria.