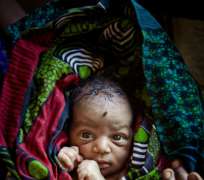 • Until recently, Malawi had the highest rate of maternal mortality in the world for a non-conflict country

• Joyce Banda became president in 2012, renewing commitment and driving change in the traditional approach to birth

• Banda shares her own difficult experience giving birth, and how it was instrumental to her motivating in improving the health of women and babies in her country

“I got out of that hospital and I said, 'Why did I live? There must be a purpose.'” - President Joyce Banda, Malawi

In Lifelines: Between Life and Death, premiering on Thursday, 15 May 2014, Al Jazeera English looks at how Malawi has achieved a dramatic turnaround in maternal and neonatal mortality. President Banda shares her own personal experiences with Al Jazeera, revealing she may have died without expert help in a hospital setting.

But the country aims to have this figure down to 115 or less per 100,000 births by 2015, to meet the global Millennium Development Goals targets.

President Banda has been instrumental in driving change, and recounts her own experience. “The doctor said we have to induce, or we will lose the baby,” she remembers. “I didn't know that when your blood pressure goes up, you can lose the baby. Finally they induced and I thought it was over. And then half an hour later, I just collapsed. I was bleeding to death. I got out of that hospital and I said, 'Why did I live? There must be a purpose.'”

One of Malawi's major breakthroughs was a controversial ban on traditional birth attendants, which was opposed and overturned, but then re-instated when Joyce Banda became president in 2012. The president has ordered that women should only deliver with skilled help in clinics and hospitals.

Another breakthrough was when President Banda appointed Chief Mac Julio Kwaitane as the chairperson of The Presidential Initiative on Maternal Health and Safe Motherhood. The initiative recognises that the country's 20,000 traditional chiefs still largely determine what kinds of health-care options are available to women, so trains them in the importance of clinic births for rural women. The efforts by village chiefs and local communities have resulted in a 30% increase in deliveries at health facilities.

“My mother experienced a prolonged labour for two consecutive days, just imagine,” says Chief Kwaitane. “She was about to die. That story, when she was narrating to me, I nearly burst into tears. I pledged that I would never allow any women in my village to deliver in the hands of unskilled personnel.”

The sixth documentary in a groundbreaking eight-part series, Lifelines: Between Life and Death premieres on Al Jazeera English on Thursday, 15 May 2014 at 20h00GMT. It's directed by South African Clifford Bestall, a Grierson, Emmy and Peabody award-winning documentary filmmaker.

Watch and embed the promo: https://www.youtube.com/watch?v=uip_5yw6XKE.

For more information on maternal and neonatal mortality, visit http://www.aljazeera.com/programmes/lifelines/maternalandneonatalhealth.html

Lifelines: The Quest for Global Health highlights the work of inspiring Africans on the frontline of public health.

A Vimeo link to review the documentary is available on request.

The full documentary will be available on YouTube to embed following its TV run. This link is available on request.

High-res pics are available at:
https://www.dropbox.com/sh/211kmuply68eogh/AAClJ6gU2UfurcQtmEsrasoHa