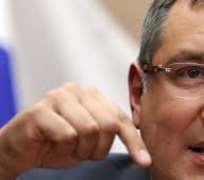 Russia cast doubt on the long-term future of the International Space Station, a showcase of post-Cold War cooperation, as it retaliated on Tuesday against U.S. sanctions over Ukraine, Reuters reports.

Deputy Prime Minister Dmitry Rogozin said Moscow would reject a U.S. request to prolong the orbiting station's use beyond 2020. It will also bar Washington from using Russian-made rocket engines to launch military satellites.

Moscow took the action, which also included suspending operation of GPS satellite navigation system sites on its territory from June, in response to U.S. plans to deny export licences for high-technology items that could help the Russian military.

“We are very concerned about continuing to develop high-tech projects with such an unreliable partner as the United States, which politicises everything,” Rogozin told a news conference.

Washington wants to keep the $100 billion, 15 nation space station project in use until at least 2024, four years beyond the previous target.

Moscow's plan to part ways on a project which was supposed to end the “space race” underlines how relations between the former Cold War rivals have deteriorated since Russia annexed Ukraine's Crimea region in March.

Since the end of the U.S. Space Shuttle project, Russian Soyuz spacecraft have been the only way astronauts can get to the space station, whose crews include mostly Americans and Russians, as well as visitors from other countries.

At a time when Moscow is struggling to reform its accident-plagued space programme, Rogozin said U.S. plans to deny export licences for some high-technology items were a blow to Russian industry. “These sanctions are out of place and inappropriate,” Rogozin said. “We have enough of our own problems.”

Moscow's response would affect NK-33 and RD-180 engines which Russia supplies to the United States, Rogozin said. “We are ready to deliver these engines but on one condition that they will not be used to launch military satellites,” he said.

ULA on Tuesday said it was not yet aware of any restrictions and hopes talks will resolve any issues that do arise. It added that it can use other launch vehicles and has a two-year supply of engines to smooth over any transition.

“ULA and our Department of Defense customers have always prepared contingency plans in the event of a supply disruption,” ULA spokeswoman Jessica Rye said in a statement.

Rogozin said Moscow was planning “strategic changes” in its space industry after 2020 and aims to use money and “intellectual resources” that now go to the space station for a “a project with more prospects”.

He suggested Russia could use the station without the United States, saying: “The Russian segment can exist independently from the American one. The U.S. one cannot.”

The U.S. space agency NASA is working with companies to develop space taxis with the goal of restoring U.S. transport to the station by 2017. The United States currently pays Russia more than $60 million per person to fly its astronauts up.

Rogozin said Russia will suspend the operation of 11 GPS sites on its territory from June and seek talks with Washington on opening similar sites in the United States for Russia's own satellite navigation system, Glonass.

He threatened the permanent closure of the GPS sites in Russia if that is not agreed by September. Rogozin said the suspension of the sites would not affect everyday operations of the GPS system in Russia, where it is used by millions of Russians for navigation on their smartphones and in their cars.

The upheaval in Ukraine – where the United States says Russia is backing separatists and the Kremlin accuses Washington of helping protesters to topple a Moscow-friendly president in February, has led to the worst East-West crisis since the 1991 collapse of the Soviet Union.

In addition to the high-tech sector sanctions, the United States has imposed visa bans and assets freezes on officials and lawmakers and targeted companies with links to President Vladimir Putin. The European Union has also imposed sanctions.

The Russian Foreign Ministry said earlier on Tuesday that the latest EU measures were an “exhausted, trite approach” that would only deepen discord and hamper efforts to defuse the crisis in Ukraine. (Additonal reporting by Irene Klotz and Gabriela Gabriela Baczynska Writing by Steve Gutterman and Alissa de Carbonnel; Editing by David Stamp)