US deploys planes in search for Nigerian girls 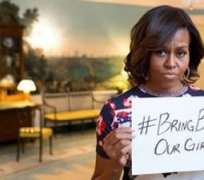 The US has revealed it is flying manned surveillance missions over Nigeria to try to find more than 200 schoolgirls kidnapped by the militant Islamist group Boko Haram. The US is also sharing commercial satellite imagery with the Nigerian government, officials said. It comes after militants released a video of about 130 girls, saying they could be swapped for jailed fighters. Boko Haram seized them from a school in the northern Borno state on 14 April. 'We have shared commercial satellite imagery with the Nigerians and are flying manned ISR (intelligence, surveillance and reconnaissance) assets over Nigeria with the government's permission,' a senior administration official, who declined to be named, said. A team of about 30 US experts - members of the FBI and defence and state departments - is in Nigeria to help with the search. The BBC's Rajini Vaidyanathan in Washington says the types of aircraft deployed haven't been revealed, but the US does have sophisticated planes that can listen into a wide range of mobile phone and telecommunications traffic.

Other officials, quoted by Reuters, said the US was also considering deploying unmanned 'drone' aircraft to aid the search. US state department spokeswoman Jen Psaki said earlier on Monday that intelligence experts were closely examining the Boko Haram video for clues that might help locate the girls.

Pogu Bitrus, a leader in the town of Chibok, from where the girls were seized, said vegetation in the video resembled that in the nearby Sambisa forest reserve. The video showed some 136 girls wearing bulky hijabs. Militants said they had 'converted' to Islam. The girls' families have said that most of those seized are Christians. Two girls on the video were singled out for questioning and said they were Christians but had converted to Islam. Boko Haram leader Abubakar Shekau said the girls could be exchanged for 'our brethren in your prison'. BBC