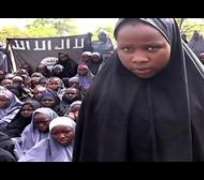 The Nigerian Islamist militant group Boko Haram released a video that purports to show about 130 of the schoolgirls it kidnapped in the northeast almost a month ago, BBC reported.

The 17-minute video shows girls wearing hijabs and reciting lines from the Qur'an, the London-based broadcaster said Monday. It doesn't say when or where the video was taken or offer confirmation that the girls shown were among those abducted. Boko Haram leader Abubakar Shekau said the girls will be held until imprisoned militants are freed, the BBC said. The video was originally obtained by Agence France-Presse.

The kidnapping of the 276 schoolgirls from their dormitories on April 14 has sparked international outrage and offers of help, while heightening pressure on Nigerian President Goodluck Jonathan, whose administration was criticized in Nigeria for not speaking publicly about the incident for almost three weeks.

Nigeria has accepted an Israeli offer to join countries including the U.S. and U.K. in helping to rescue the schoolgirls abducted from the town of Chibok in Borno state, Jonathan's office said Sunday. Teams from the U.K. and U.S. arrived in the country on May 9 to aid rescue efforts, while France and China have also pledged support.

“Nigeria would be pleased to have Israel's globally acknowledged anti-terrorism expertise deployed to support its ongoing operations,” Jonathan told Netanyahu, according to the statement.

Social-media campaigners using the Twitter hashtag #BringBackOurGirls say they have organized marches in Nigeria's commercial capital, Lagos, and Benin City in the south of the country, this week.

“I personally believe that their involvement will assist in no small measure towards rescuing our daughters,” Emmanuel Mutah, a 47-year-old father of two of the missing girls, his biological daughter Saratu Emmanuel, 17, and Elizabeth Joseph, 19, whom he adopted, said by phone Monday from Chibok.

France plans to host a summit with Nigeria and its neighbouring countries in Paris on May 17, French President Francois Hollande said yesterday. The meeting will discuss security and the threat of Boko Haram, he said.

Jonathan said yesterday he was “optimistic” that given the overseas support for the search for the schoolgirls, “success will soon be achieved.”

Boko Haram, which means “western education is a sin” in the Hausa language, claimed responsibility for the abduction of the schoolgirls.

In a previous video, Shekau threatened to sell the girls in “markets” and marry them off, helping to galvanize a global campaign to free them joined by U.S. First Lady Michelle Obama and Pakistani activist Malala Yousafzai.

Boko Haram carried out the school raid on the same day it detonated a car bomb on the outskirts of Abuja that killed at least 75 people, the capital's worst ever bomb attack. That was followed on May 1 by another bomb nearby, less than a week before Abuja hosted the World Economic Forum on Africa, a global meeting of about 1,000 executives and politicians.