My father is judge, prosecutor at home -Charlie Boy 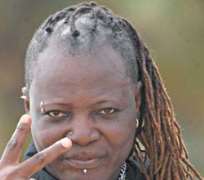 Charles Oputa, first son of the late Justice Chukwudifu Oputa, said that his father was not just a legal icon but also a judge and prosecutor at home.

Oputa, popularly called, Charlie Boy in Nigeria's social circle, made this known in an interview with the News Agency of Nigeria in his house in Gwarimpa, Abuja on Saturday.

According to him, Oputa is an uncompromising upright man, strict disciplinarian and an overbearing father who never compromised on whatever standards that he set for his children.

He said that when he was growing up he felt that his father's influence was an albatross on his neck.

Oputa said that he had to rebel against the 'status quo' by taking to the entertainment career which was not in line with his father's wish for him.

'My late father was not just a renowned legal icon but he was also a responsible family man, a judge and prosecutor at home because nobody could win any argument against him on all issues at home.

'While growing up I thought my dad was unnecessarily overbearing and an albatross on my neck, so I decided to rebel against him and be far away from his shadow.

'So, when I returned from the US, I decided to relocate from my father's Lagos base to the village and later set up Charlie Boy Music and Brand through personal hard work and tenacity of purpose,' he said.

He said that when he made a success of his brand, his father had no choice than to have total respect for him and sought his opinion on 'everything under the sun'.

Oputa said that 10 years before his death, his father became his best friend and would never take any major decision without seeking approval first from him.

Charlie Boy said he would miss his father's friendship and intimate conversations with him, which he said, bordered on 'everything under the sun, ranging from law, politics, sex and religion'.

'To underscore this cordial father-son relationship, I literally died for the two days that he was ill that led to his death,' he said.

Oputa, however, expressed dismay over the fact that the report of the Obasanjo administration's Human Rights Violation Panel which was chaired by his father had yet to be implemented.

NAN recalls that the late Oputa, popularly called the Socrates of Nigeria's Supreme Court, died on May 4 in Abuja at the age of 96. NAN