Priests are not 'masters of doctrine' – Pope Francis 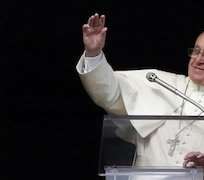 Pope Francis on Sunday ordained 13 new priests in the Vatican, telling them they were not “masters of doctrine” and should be more forgiving of their parishioners.

“It really pains me when I come across people who no longer go to confession because they get harangued, badly treated, told off,” Francis said in his homily at the ordination mass in St Peter's Basilica.

“They feel the doors of the church are being shut in their faces. Please don't do this. Have mercy,” the Argentine pontiff said.”

“It is not you who are the masters of doctrine, it's the Lord's doctrine.”

The 13 priests, who lay face down in front of the altar as part of the ordination ritual, included six from Italy and one each from Brazil, Chile, Ecuador, Pakistan, South Korea, Venezuela and Vietnam.

Pope Francis has put forward a more tolerant and pastoral approach than his predecessors, insisting for example that priests should baptise the children of unmarried Catholic couples and single mothers.

He has also said the Catholic Church should not be “obsessed” with topics like abortion, contraception and gay marriage although he has not called for any changes to Catholic doctrine on these hot-button issues.