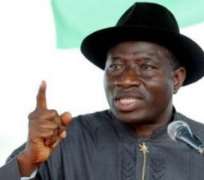 President Goodluck Jonathan on Thursday expressed optimism that with the global  efforts to  find and rescue the  over  200 girls  abducted   from their school by Boko Haram insurgents, was a signal that  an  end  to the reign of terror in Nigeria had begun.

Jonathan, who once again  promised that   the girls  would be rescued,  spoke  at the opening session of the ongoing World Economic Forum for Africa  in Abuja.

He  thanked the foreign nations including , the United States, Britain, France and China for their support in trying to  find and rescue the girls .

The President also lauded  the  delegates for coming to Nigeria despite the danger posed by militants, saying  their  presence  was   a big blow  to terrorists.

Jonathan said, 'Let me use this unique opportunity to appreciate all the countries that have expressed their commitment, especially in terms of rescuing these girls that disappeared in one of our secondary schools.

'The government of China promised assistance and I believe that assistance will come almost immediately. The government of the US, the UK  and France have also  spoken with me and expressed their commitments towards resolving  this crisis in Nigeria.

'I believe that the kidnapping of these girls will be the beginning of the end of terror in Nigeria.'

The President  observed that if the participants had decided not no attend because of the negative news coming from the country, the terrorists would have jubilated and  be further emboldened to carry out more attacks.

He  said, 'Nigeria is proud to host this event for the first time the conference is coming to West Africa. Let me use this unique opportunity to appreciate you for accepting to come. As a nation we are facing attacks of terrorists.

'Let me appreciate you individually and collectively for  your support for us, your sentiments and by your presence here in Nigeria at this time. You have already supported us to win the war on terror.

'If you had  refused to come because of fear, the terrorists would have jubilated and even committed more havoc. But your coming here to support us morally is a major blow to terrorists.'

During another session of the event tagged, 'Unlocking job-creating growth,' where he served as a panelist, Jonathan identified one of the greatest challenges currently facing Nigeria as insecurity , especially in the North-East.

He said though Nigeria  did not expect terror, his administration was working hard to build capacity and put the situation under control.

Jonathan  said although it was impossible to give a timeline on when peace would be restored, there was hope for the country.

The President disclosed that he recently gave an approval  for $1bn  to be spent  on the purchase  of  some  equipment  needed  to fight terror  war.

He said, 'The first time a Nigerian was involved in terror was in December 2009 when a young  Nigerian   who grew up abroad wanted to bring down a plane that was going to the US.

'The reaction of Nigerians then was that that was strange;  that it was because he grew up outside the country and came from a very wealthy family. So, it was not an issue of poverty but an issue of extremism.

'We never knew that we  were really moving into crisis. It is a phenomenon that was never part of our problems.

'Not too long ago, I gave an approval of over  $1bn  for us to acquire what we require. That is just not enough but that is just an example and it is of recent.

'I can guarantee that we shall bring this(terrorism) under control. Yes, it is difficult for any nation to say that it has the magic  to wipe away issues of security challenges otherwise , a place like the  US ,with the money and technology, people wouldn't have been shot there as we hear every time.

'No one President can say yes, in a year or in a month    there will be absolute peace but we are working hard. We are training our people  and we are building capacity. And  of course,  we are getting assistance from other places  that have experienced terror  attacks.