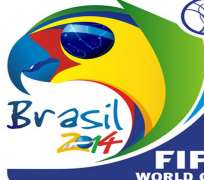 Ronaldinho, Kaka and Robinho were left off Brazil’s World Cup roster by coach Luiz Felipe Scolari, who selected just five players who went to the 2010 tournament with the Selecao.


Goalkeeper Julio Cesar; defenders Thiago Silva, Dani Alves and Maicon; and midfielder Ramires were the only returnees from the tournament four years ago on the 23-man roster announced Wednesday. Fred, a forward on the 2006 World Cup roster, was selected after missing the 2010 tournament.

“I don’t think this lack of World Cup experience will play a big part,” Scolari said. “Our players have been gaining experience in their leagues in Europe, and I don’t think they will be affected by this too much, although in certain World Cup situations, having that experience would be important. But I fully trust these players.”

There were no major surprise picks in Brazil’s group, which includes 16 players who were on the roster for last year’s Confederations Cup, a warmup tournament in which the Selecao beat Spain 3-0 in the final. The team includes young stars such as Neymar and Oscar. AP