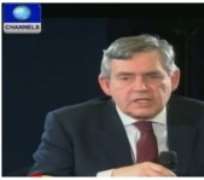 A group of Nigerian and foreign business men have agreed to put together $10 million fund to assist in the provision of security in the troubled Northeast Nigeria.

The group, which includes the UN special envoy for education and former British Prime Minister, Mr Gordon Brown, met at the World Economic Forum on Africa (WEFA) holding in Abuja, on Wednesday.

The meeting which focused primarily on finding solution to the growing attacks and kidnap of young girls in Nigeria, announced a $10 million dollars funds for schools in the north eastern part of Nigeria.

After a closed door meeting, the group announced the establishment of the fund as an initial intervention measure for 500 schools in the north east to build community, strengthen security and promote schools as safe places.

The initiative is coming just as the global community turns full swing on the recent kidnapping of over 200 school girls in the north east, with far reaching responses to terrorist acts around the world.

Safe Schools Initiative
At the forum, the group encouraged the government to invest in education and promote schools as safe places.

The initiative was in line with Safe Schools Initiative that was launched as part of the World Economic Forum on Africa.

Explaining the conditions for schools that will benefit from the fund, Mr Brown said: 'We want parents and teachers to look into what safety measures they need for the schools and we want the government to work with the international business community. I believe obviously that the schools that are in need of this are in the north of the country.

'And there are 5000 schools in these areas. We want to stand beside the people of Nigeria to ensure that action is being taken'.

According to the business leaders, this initiative amongst others is the only way education in the northeast can continue.

'In addition, there is a gender gap issue. Nigeria ranks 106 out of 136 countries that we cover on gender gaps and one of the worst areas is on education attainment,' she said.

The Chief Executive Officer of Thisday Newspaper, Nduka Obaigbena, stressed that while the Nigerian government are committed to bringing back the girls abducted by members of the Boko Haram sect from a school in Chibok, Borno State, the fear of going to school had become the greatest danger.

'If we do not take time we could lose a generation of students who are afraid of their safety in schools,' he said.

Participants at the meeting also stressed the need for the government to ensure that schools were safe and well secured to ensure that students do not nurse fears of being abducted.