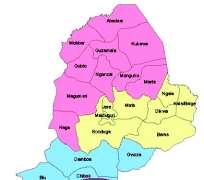 We have received reports of ongoing deadly attacks by Boko Haram terrorist attack at Askira/Uba local government. Gunmen all dressed in military uniform stormed the villages in the local government and have been firing indiscriminately killing dozens of villagers.

The Boko Haram gunmen invaded the village in more than twenty Hilux vehicles and motorcycles. Three villages are under attacks so-far; Musa, Uba and Diley villages according to the incoming information. Villagers from the Musa, one of the attacked villages ran into the bushes to hide and from there made the call to ENDS, describing the ongoing deadly attacks.

The army has been informed but are yet to respond.There is no report on total causalities as the attack is happening now--it started since about 1pm Nigerian time--but so far many have been reported shot and killed and buildings are being burned to the ground.

Monday, Boko Haram killed 300 villagers in Gamboru Ngala, and then abducted another 11 girls in Chibok local government. After the terrorists attacked Gamboru Ngala, Monday, they wrote a letter to the military, saying that they will attack Maiduguri, capital of Borno state next. In a meeting with the Civilian-JTF yesterday, Tuesday, the Civilian-JTF requested permission to bear arms to defend their communities, they were told that this has to be approved by the president of Nigeria.