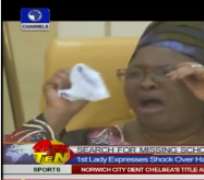 The All Progressives Congress (APC) has described as distracting and counter-productive the reaction of the First Lady, Dame Patience Jonathan on the recent abduction of over 200 schools in Chibok area of Borno State.

APC in a statement issued in Lagos on Tuesday by its Interim National Publicity Secretary, Alhaji Lai Mohammed said Mrs. Jonathan's 'crocodile' tears on national television would not bring back the abducted girls.

According to the statement, 'Make no mistake about it, there is nothing wrong in the First Lady, as a woman and the mother of the nation, playing a role in resolving the unfortunate abduction of the girls, but that role must be within the realms of social activism, not in policy making or conduct of state affairs,'

'What will bring them back is a purposeful and sustained effort by the Federal Government, which has hitherto been tentative and lethargic. Therefore, enough of the distracting, absurd and overbearing show that the First Lady has put up in the past few days,' APC said.

The party urged the First Lady to lead a protest of other First Ladies from all the 36 states of the Federation from the Eagle Square to Aso Rock to pressure her husband, President Goodluck Jonathan on how to rescue the girls.

'The First Lady has summoned the Borno State Police Commissioner; the Divisional Police Officer for Chibok; the Borno State Commissioner for Education, the relevant Local Government Chairman, the school principal and the school gate man, among others. Where did she derive the authority or power to issue such summons? Does she know the implication of forcing security officials to divulge, on public television, sensitive information that could even hamper the search for the girls? How can a Police Commissioner, who is not accountable to the Governor of a state, be subject to the First Lady? Where in the Constitution, or any law for that matter, is the role and powers of the First Lady delineated or articulated?' it said.

'Apparently, the First Lady believed, as she revealed on public television and as it has been insinuated in certain quarters, that the girls' abduction was a ruse aimed at embarrassing her husband, hence neither she nor her husband took the whole tragedy seriously. That explained their delay in acting.

'Now that the Boko Haram terrorists have claimed responsibility for the abduction and even threatened to sell the girls, the nation hopes that the First Lady and her husband now believe this is no 'politics',' it added.