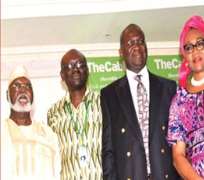 A former military Head of State, General Abdulsalami Abubakar, Tuesday warned the political class against politicising insecurity as it could worsen the already delicate situation in the country.

Abdulsalami who spoke in Lagos at a discourse with the theme: 'Nigeria at 100: Reflections on the future,' to herald the launch of TheCable, an online newspaper  published by a former THISDAY Editor, Mr. Simon Kolawole, urged politicians to put the country first.

While stressing that it would require the collaborative efforts of everyone to achieve a peaceful society, he expressed the wish that politicians would learn some lessons from America.

He said: “I appeal to politicians and all Nigerians to always put Nigeria first. I appeal to them to forget their differences when issues of security or Nigeria are at stake. Don't play politics with security. 'Perhaps our politicians can learn some lessons from America. Whenever there is an election, they identify themselves as Republicans and Democrats.

'As soon as election is over, they identify themselves as Americans. I understand that politicians will always be politicians, but politics should not be destructive.”

Kolawole, who said the online media is targeted at becoming Africa’s number one online newspaper in terms of influence, content and traffic, added that the mandate is to deliver knowledge-driven journalism in the pursuit of Nigeria’s progress.

During the discussion, Fashola condemned the bid to stop the National Assembly from probing the Minister of Petroleum Resources, Mrs.  Diezani Alison-Madueke and the Nigerian National Petroleum Corporation (NNPC) for allegedly spending N10 billion on chartered aircraft.

He said: “This nonsense should stop. There is supposed to be separation of powers. No arm of government is supposed to impose its position on another arm.

“It is when the House finishes its constitutional responsibilities that the court may be required to play any role, not before the lawmakers have carried out their duties.”

Blaming the political class for the country's woes, Fashola said: “How many politicians do we have in Nigeria? Let us do the math. Is it an average of 72,000 politicians that is a problem to 160 million people? Did they put themselves there? How many of you voted?

“The country has laws aplenty but where systems do not work, laws would not be obeyed. If you want change, go and be the change you want.”

Speaking on insecurity, the governor lamented that although the police are blamed for being inefficient, the government on its part has not done enough to make the law enforcement agency an efficient one.

Delving into the telecommunications sector, he queried the  country's contributions to the success achieved, adding that, “we can talk of telephones, but where is the Nigerian telephone?”

In her contribution, Anyanwu  said she dreamt of a time politics in Nigeria would no longer be parochial and everyone could run for public offices wherever they live irrespective of their states of origin.

She said: 'We have to tap into the strength of our diversity. When someone from Lagos can go to Kano and become a governor, until we get to that point, we cannot become the giant of Africa.”

Momoh who also spoke in the same vein, said: “Values have taken a plunge and there is crass materialism, with people of shady characters being accorded recognition both in the media and the political space, and even ending up making laws and being voted into public office.

“Politics should be made less attractive. Make it possible to work without pay. If you make political offices less attractive, the real people will step up. There is need for us to reset, go back to the basics and make sure we're on the path to development.” Ogunsanya on the other hand said Nigeria did not need 100 years to develop, rather the government should focus on good governance and infrastructure.

He said: “The successes recorded in the telecoms section within a few years in which there is now about 130 million subscribers show that rapid development is possible.

'If we can do these in a few years, I don't think we need 100 years to turn the country around. The government, the civil society, the business community, if we come together, nothing can stop us.' THISDAY