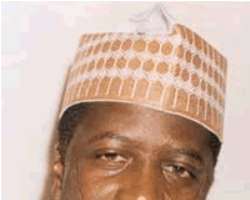 Bafarawa escapes arrest
• Supporters whisk ex-gov away from court
From AHMED OYERINDE, Sokoto
Thursday, March 18, 2010
There was a mild drama at the premises of Sokoto State High Court on Wednesday as the operatives of the Economic and Financial Crimes Commission (EFCC) were prevented from re-arresting the former state governor, Alhaji Attahiru Bafarawa.

The teeming supporters of the former governor stormed the court and checkmated the EFCC's attempt at re-arresting him even as his counsel, Chief Lateef Fagbemi (SAN) described the move as uncalled for.

In his submission, Fagbemi told the court the need to stay all actions on the case pending the outcome of the decision of the appellate court on the matter. Also, presenting his submission, Chief Adeniyi Akintola (SAN), counsel to EFCC expressed dismay that people ran to file a case at the appellate court to delay dispensation of justice. Justice Bello Abbas, however, agreed to stay all the proceedings on the matter and adjourned the case till April 7, 2010 pending the outcome of the appeal.

It would recalled that the court had on the last adjourned date lifted bail on the former governor for not appearing before the court while some of the 18 accused persons attend the court sitting.

During the ex-governor's re-arrest attempt drama, counsel to Bafarawa warned the EFCC officials that he would sue them personally if they effected the arrest because, according to him, 'the court did not make an order that can warrant his re-arrest.'

With that comment, supporters and political associates siezed the opportunity to whisk the former governor out of the court premises.