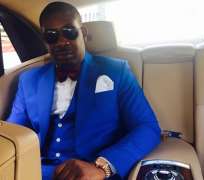 Michael Collins Ajereh born November 26, 1982, better known as Don Jazzy, is a Nigerian Multi award-winning record producer, singer-songwriter, musician, former CEO of Nigerian record label Mo' Hits Records founded in 2004 and current CEO of the Mavin Records label which he founded in May 2012, after his split up with childhood friend and Mo'Hits partner, D'banj.

Born in Umuahia in Abia state, his first signing was D'banj who was at that time also the Vice-President of the label and now President after split. Don Jazzy's first full credit production work was in 2004 on Tongolo for Nigerian singer D'banj. He went on to produce D'banj's first studio album titled No Long Thing released in 2005.

Michael Collins Ajereh was born in Umuahia and hail from Delta state. His family moved to Ajegunle city in Lagos state where he was raised, and graduated from Federal Government College Lagos. Michael Had always had a flair for music singing and playing the drums from the age of four.

He developed a passion for the bass guitar at the age of 12, he went on study Business Management at the Ambrose Alli University Ekpoma in Edo state. He moved to London in the United Kingdom in 2000 after his Uncle invited him to come play the drums for the neighborhood Church.

Various odd jobs followed including working at McDonalds and as a security guard. Already imbued with an intimate knowledge of traditional and percussion instruments, Don Jazzy further built on his musical knowledge during his UK stint. Finding fellow kindred sprits in the likes of Solek, JJC, Kas, The 419 squad and D'Banj, the gang would spend unrelenting hours practicing, recording and performing different types of music.

He also collaborated with Jay-Z and Kanye West on the production of Lift Off, featuring Beyoncé on the album Watch The Throne, released on August 8, 2011.

He recently was rated as the 36th. "Most powerful celebrity in Africa" according to Forbes.