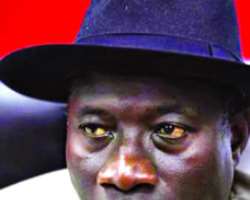 The dissolution came exactly 40 days after he assumed office as acting president and commander-in-chief of the armed forces and jolted many of the ministers, particularly the Yar'Adua loyalists. An insider source said although there were series of speculations to that effect, the dissolution took many of the ministers by surprise as they least expected that it would be carried out so soon.

The former Minister of Information and Communications, Prof Dora Akunyili announced the dissolution of the cabinet in Abuja yesterday when she briefed State House correspondents on the outcome of yesterday's weekly Federal Executive Council presided over by the acting president.

'Today, the Acting President of the Federal Republic of Nigeria, Dr Goodluck Ebele Jonathan has dissolved the federal executive council. Thank you,' she stated, pointing out that the former ministers were directed to go back and hand over to their respective permanent secretaries immediately.

The former minister of the Federal Capital Territory (FCT), Alhaji Adamu Aliero was the first to confirm the dissolution of the cabinet, which information had earlier filtered through when on emerging from the council chambers venue of the meeting, he told a journalist 'my brother I am now powerless, we have been dissolved.'

The Acting President's action is believed to be a direct response to the advice by various groups in the wake of his assumption of power to try and be his own man and take full charge of his administration. A terse statement by the Acting President's spokesman, Ima Niboro, last night said: 'The cabinet dissolution is a bid to inject fresh blood and bring even greater rigour to governance.

'It is part of the larger strategy to frontally confront core challenges that face the nation at this critical moment of our history.' Following the departure of President Yar'Adua to Saudi Arabia last November 23 on health ground and his sudden return to the country last month, the dissolved cabinet had been plagued by acrimony and suspicion as ministers became divided along pro and anti-Yar'Adua groupings.

The dissolution of the cabinet became inevitable following the immense pressure mounted on the acting president by several groups and personalities within the country and outside its shores over what many perceived as disloyalty to the Acting President by some of the former ministers.

As soon as the meeting ended, most of the former ministers walked out of the council chambers and headed straight into their waiting cars without the usual exchange of greetings and banters among themselves and with friends.

However, the former Minister of Labour and Productivity, Alhaji Ibrahim Kazaure, who was redeployed just three weeks ago from the special duties ministry thanked government for the opportunity to have served the country, saying he had no regrets whatsoever. As a career politician, he said he was heading back to the trenches to continue from where he left off.