Kalu, His Mouthy And Unending Harangues ... 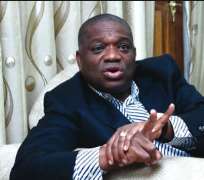 Former Governor of Abia State, Chief Orji Uzor Kalu is becoming a brand in making unguarded statements. When you think that he has learnt his lessons and may keep quiet, he explodes like a bomb abandoned by rebels who are on the run.

His behaviour shows him as a greatly troubled person full of ambivalence. This got me into checking out the wise words of Winston Churchill that 'Courage is what it takes to stand up and speak and courage is also what it takes to sit down and listen.'

His recent verbal rampages especially the recent one on the Panorama page of Tell Magazine, April 21st, 2014 rattled the ethos and sensibilities of right thinking Nigerians.

Where can you place Kalu? Is it on his ideological stand or on issues of faith and importance!

Where does he stand on national and international issues? Which is his present political party? Kalu claims to be a registered PDP member, yet he went to the Western Region of Nigeria, campaigning for the return of the Governors who are staunch APC members.

If he is a real PDP member as he claims, should he not be facing a panel and tried for anti-party activities? His behavior captures the prognostication of John Stuart Mill that 'A man who has nothing for which he is willing to fight, nothing which is more important than his own personal safety, is a miserable creature and has no chance of being free unless made and kept so by the exertions of better men than himself.

He is known to have constantly denigrated elder statesmen on the pages of newspapers; he has not relented in abusing our revered leaders like Obasanjo who was the Commander in Chief when Kalu was only 16 years. His name calling extended to Atiku last year is still ear-tingling.


That apart, he is not afraid of starting things he cannot finish. In 2003 Kalu came up with the Igbo presidency, by the time the Igbos started singing alleluia songs that an Igbo leader has emerged, Kalu buckled and did an about-turn. Two years ago he went everywhere with the Igbo Presidency mantra. It was claimed that he made a presentation at the British Parliament and toured some West African countries preaching the same gospel. Now he has dashed our hopes with more fury and intensity as he claims now to be campaigning for Jonathan.

These questions come up again: where do we place Kalu? What has Kalu offered? As Kalu was reported to have said, 'what fresh ideas can these sleepy old men offer on the way forward?' Does Kalu himself know the way forward or is it just the fox and sour grapes situation as he was not nominated as a delegate either by the Federal or State government to the National Conference?

He was given the Abia people's mandate for eight years and it was eight years of scandals, controversies and plunder for which he is still an interned guest of EFCC.

Kalu's solecisms on old people raise psychological questions if he is actually stable. Kalu is not expected to compulsorily love or respect the old people; after all he grew up without any. Such lack of parental guidance brings one to examine the frequently asked questions when Kalu was in office. 'Did he suck enough breast milk as a child? A potent question in Igbo cosmology where it is generally believed that a motherless child who did not suck enough breast milk will always fumble. This belief by Igbos have been supported by science which now stipulates nothing less than six months of breast feeding.

Another recurrent question in the heydays of Kalu as governor was, 'who is or was Kalu's father?' Sitting in Government House of Abia State for eight years, nobody was once introduced as Kalu's father. There was a man rumoured to be Kalu's father but when he died, Eunice, Kalu's mother and his two brothers did not organize or attend the burial, raising so much doubt to such paternity. These facts alone say so much about Kalu's phobia for old men.

Now, Kalu should be told some home truth whether he likes it or not. The National Conference is studded with men and women of ideas and integrity, starting from the head, the retired jurist, Lord Kutigi to the last person. Look at the array of men and women Kalu is disparaging: Mike Ahamba, Florence Ita Giwa, Gen Nwachukwu, Dr J.C. Ogbonnaya- a three-time conferee, Chief Afe Babalowa, SAN and erudite lawyer. Others are Iyom Josephine Anenih, Dr Peter Odili, King Alfred Diete Spiff, Chief Edwin Clark, Profs Ibrahim Gambari, Jerry Gana and Jubril Aminu, to mention only few. Are these sleepy old men?

Last time he took a swipe at Abia PDP leaders like Ambassador Ojo Maduekwe, Senator Enyinnaya Abaribe, Chief Onyema Ugochukwu, Chief Vincent Ogbulafor, General Ike Nwachukwu and others. Can he unlace the sandals of these colossal men? Come to think of it, can any defy age? It has been proven that if you don't age, you have not lived.

The Igbos have an apt proverb that he who does not respect the aged people will not attain old age. The bible concurs in Ephesians, Chapter 6 Verse 2, 'honour your father and mother; which is the first commandment with promise that it may be well with thee, and thou mayest live long on the earth.'

Kalu went into governance at the age of 31, what did he achieve if the best comes from the youth?

He may have forgotten the Igbo saying that what an old man sees sitting cannot be seen by a youth standing atop a tree.

According to a Danish proverb, 'a fool is like all other men as long as he remains silent.' Kalu should learn to be silent. He should make extrapolations from other governors like Peter Odili, Achike Udenwa, Nnamani and others. They have not been caught yapping like market women.