NO THANKS TO ABDULLAHI 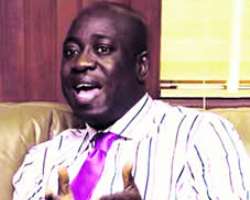 When Mallam Bolaji Abdullahi was dropped from the federal cabinet a few weeks ago, the consensus was that he was one of the best ministers in the Federal Executive Council and that competence was sacrificed on the alter of politics.

Even the sports media, notorious for its caustic pen and for being the albatross of more than one minister, praised Abdullahi for bringing stability to the sector and as the best minister of sports Nigeria had had in a while.

Nothing best describes the affection of the sports community for Abdullahi than the soppy headlines, 'Thank you, Abdullahi,' 'Bowing out with pride', and the likes, which became common in the days after his sack.

I worked with Mallam Abdullahi for more than two years, first in Youth Development and later in Sports, so I think I know what makes the man tick.

I know that the adulation that followed his exit from the FEC was well earned and well deserved.

I know too what it cost Mr.
Abdullahi to follow the narrow path to build a reputation as a competent manager of men and resources.

It is essential to tell the Abdullahi story, it is a story which suggests that Nigeria is redeemable, that in a society where mediocrity is often celebrated, there could be competent, honest and detribalized folks in government.

I first met him in 2008 in Lagos where I was the editor of a magazine and he a Commissioner for education in Kwara, becoming famous for radical reforms.

After interviewing him, I left with the impression that he was very knowledgeable and cut out for greater things.

The next time we met was in July 2011 when I was invited to be part of his team soon after he was appointed Minister of Youth Development.

That began the journey with him, at the end of which I have come to admire him deeply as an innately good man imbued with rare qualities.

Abdullahi is a handworker who has a single-minded pursuit of results.

No matter how difficult or complex the matter was he didn't let go until it was resolved to his satisfaction.

And he is not easily satisfied.
Not with mediocrity.
Not with a job half-done.
I recall his first task in sports.
It was to find peace in the troubled football sector, where factions and litigations were crippling the administration of the beautiful game.

The sector was so crisis ridden that our senior national team, the Super Eagles had failed to qualify for the 2012 Nations Cup in Gabon/ Equatorial Guinea.

Some of the parties quarreled with the election that brought in the current board of the FA; others faulted the change of name from NFA to NFF.

Others were annoyed over some indeterminable issues, but very angry nonetheless.

The FA board led by Aminu Maigari was clearly distracted by the numerous court cases and increasing number of parties spoiling for a fight.

Abdullahi knew that achieving peace and stability was essential in creating the right policy environment for sports development.

Without it, all efforts would be tantamount to fetching water with a basket.

So he went about it, setting up meeting after meeting, sitting down with one aggrieved person and the other.

At a point, I felt it was a wasted effort and it was impossible to achieve any kind of rapprochement among the numerous aggrieved parties.

First, they were so many and secondly, and perhaps more important, it seemed the parties thrived in a crisis environment.

And their demands were numerous, some ridiculous, others irreconcilable with any genuine effort for peace.

But Abdullahi worked at it, and after several exhaustive meetings, soothing big egos, made the parties to agree to a comprehensive peace deal.

This open-minded nature and willingness to take on difficult tasks defined the 'ministeralship' of Mallam Abdullahi.

He is very modest too and does not live above his means.

I was a bit taken aback when as a newly appointed minister of Youth Development; he was busy looking for a rented apartment in Sun City, at the fringe of the Abuja metropolis.

He got a modest apartment there and was the only minister living in the neighborhood.

Yet this is the same country we hear that some ministers spend billions on air travel, with a chartered jet at their beck and call.

But not Abdullahi, he would not spend above what he can personally afford and reminds us, his assistants that the job was temporary, which would come to an end someday.

But that does not mean he does not like the fine things of life.

He does.
His suits are often dapper and his babariga, well cut.

It is just that he would not steal or misappropriate funds to acquire these things.

However, like he often said, being poor does not indicate integrity, just as being wealthy does not mean one is a thief.

Unbelievable as it may seem, I know that as minister, he relied heavily on funds from his businesses in Ilorin- a farm and digital photography studio, among others - to supplement his living expenses, which ballooned when he became minister.

So he seemed well prepared for the leadership roles he has played since 2003 when he left journalism.

In each of this position, whether as special assistant, commissioner for education or double-barreled minister, he served with distinction, initiating policies and implementing them with passion.

But of all the good qualities of the Mallam, what I admire most about him is his knack for being confident in his own skin.

He never tired of saying that his first job in life was as a bus conductor.

He talked too about the humble beginning of his parents, a tailor father who supplemented the income of his family doing odd jobs, and a mother who was a petty trader.

Even more, he didn't mind or shy away from visiting poorer relatives in their houses with his assistants in tow.

Abdullahi seemed so sure of himself and was never ashamed of his past or the background that produced him.

That's probably why he didn't mind playing football every other Saturday with his assistants, cook, drivers, security details and mobile policemen attached to him.

Real hard football, in which there's no distinction between cook and minister.

It is the same attitude he had in his appointments, and nominations for government boards.

It was about what the nominee or appointee could offer, not where they came from or the faith they professed.

It is not surprising then that all his special assistants are Christians from the south.

When I asked Abdullahi, what shaped his philosophy and why he has turned out the way he has, he said his life was shaped by his belief in Islam and the upbringing given to him by his parents, who though poor instilled in him the ideals of Omoluabi, Yoruba for a person of integrity, a person of excellent character who is loyal and true to himself.

I think the media got it wrong in their adulation of Abdullahi; all thanks should go to his parents who produced such a fine man, an Omoluabi.