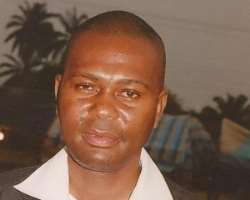 It is a blatant disregard for the rule of law for the Imo House of Assembly to invite me via radio broadcast. Upon that , I am asked to attend a panel within less than 24 hours of the radio announcement - an obvious attempt to deny me my constitutional right to seek legal advice and representation.

A source at the Imo State House of Assembly has informed me of a plot to arrest me at the venue of the probe panel set up by the Speaker and whisk me to unknown destination. The first attempt to arrest me was the March 8th invasion of my residence in Egbema in Ohaji/Egbema LGA of Imo State by armed uniformed police officers. The invaders stormed my place in a crude military-like assault asking for me and ransacking my place but I was not at home.

I have on several occasion condemned the looting of over 3 billion naira Imo tax payers money by the Imo Speaker.It is no secret that I am a critic of the Imo State Government . I write several political articles in several newspapers and online blogs criticizing the Imo State government . Although i have proved beyond all reasonable doubts that my criticisms of the state government is due to my hatred for corruption in government and an indelible love to see youths of my state get employed and my quest to bring the best out of the managers of the state but the Imo State House of Assembly has labeled me an enemy of the state that must be jailed at all costs.

I stand by my story that the Speaker of Imo State House of Assembly looted Imo tax payers money and used the money to buy eye popping mansions in Nigeria . I will not be intimidated.I don't need to appear before any panel. The Imo House of Assembly can probe into the said allegations against the Speaker with the facts and figures made available in the various allegations.

I say boldly that by setting up a probe panel to investigate the Speaker with the Speaker's bosom friend as chairman the Imo House of Assembly is promoting the very corruption that it is supposed to fight against. We have today in Imo State a legislative house that supports corruption , incites hatred against activists and media men, threatens free media and is viciously opposed to the articulation of viewpoints contrary to its beliefs and actions - openly and with total impunity. The argument of the 'lesser evil' is contextual and time-bound.

The Hon. Ikenna Emeh led House of Assembly Probe Panel clearly is nothing more than a hoax, a big make-belief. A plan to give the Speaker a clean bill of health. This probe panel is no more than a smokescreen to divert attention from the monumental and unprecedented corruption in the Imo House of Assembly. It is a momentary sensation meant to deceive the public. It insults the intelligence of Imolites and those of us who called for a probe of the Speaker. The Speaker, under the rules of natural justice, cannot be a judge in his own case.

Truth is my best defence against the Imo House of Assembly's harassment and intimidation. Fair comment and criticism covers me. The fair comment and criticism law allows columnists like me to express opinions no matter how scathing or critical. Rt Hon Benjamin Uwajumogu as a public official and public figure should prove that my allegation that he (Uwajumogu) looted Imo monies was false and that it was published with actual malice. Actual malice means that the story was published with the knowledge that it was false or that the story was published with reckless disregard of whether or not it was false.

Fighting me is an attempt to deny me the fundamental right to speak against corruption in government . Rt Hon Benjamin Uwajumogu by this plot to arrest me has moved against free speech in Imo State. His attempt will not succeed and his excuses will not stand the test of the law, the test of decency, nor the test of time.

We say NO to human rights violation by those in authority and their agents. It is ridiculous that while some public office holders who are expected to be above board but perpetrate brazen corruption are allowed to live like kings, activists and media men who are demanding sanity are threatened with lawsuits, police and dungeons of intimidation and repression. This again shows that despite the so-called emergence of civilian rule since 1999 and despite the struggle of the working and poor masses against dictatorship and for good governance, some public office holding vampires like Uwajumogu who never contributed to the termination of military dictatorship are the ones throwing the masses to the gallows. That we are still witnessing a clear attack on the media and activists in Imo State as clearly displayed by Rt Hon Benjamin Uwajumogu is a sign of bad omen for the poor working masses of Imo State.

Any bad policy or corruption of the government is antithetical to the interest of the poor masses and as such any protest against such policy by the media or by activists is a protection of the people's interest as envisaged and guaranteed by the Nigerian constitution. The right to speak against the bad policies of any government is an inalienable right, which no court of the land and which no police can take away. Some Nigerians fought and died to protect our unique right of press freedom. We can't and we won't forget that. To be an activist or a media man is not only a great responsibility, but also a high honour and not a high crime. I call on Imolites to reject the political repression against me by the Speaker. I call on Imolites to demand the total withdrawal of all police intimidation and trumped-up political allegations leveled against me.I call on workers, students, writers, bloggers , the youth, peasant farmers, artisans, professionals, traders and other sections of the working people of Imo State to speak out against corruption. I will not be intimidated.